Of Notebooks and Needles 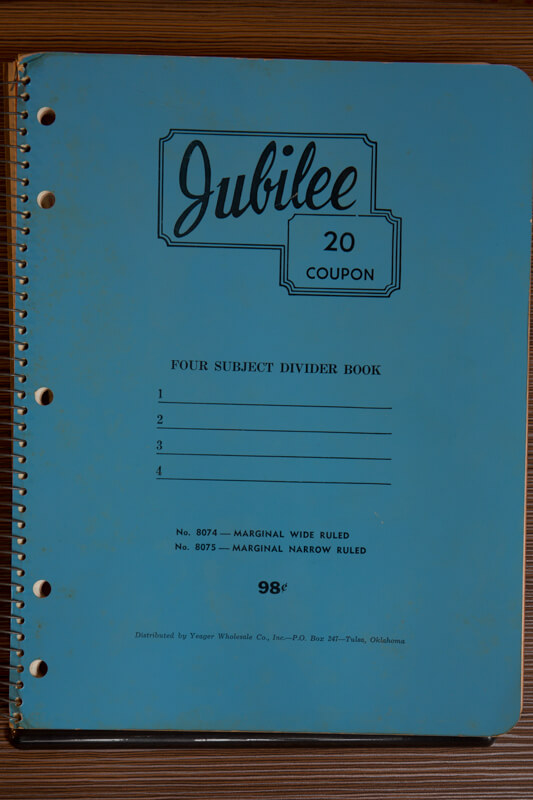 An ongoing task of mine is sorting through the boxed remnants of lives no longer lived. A barn here has a wall filled with boxes of photographs stuck to sheets in three ringed binders, mementos, a silver bell from Tiffany’s, all mixed in with scrapbooks and newspaper clippings of moments once deemed memorable but now forgotten. And boxes of dish sets. I will enter the barn determined to deal with ten things, get bogged down reading something or remembering a moment, become overwhelmed, and find another more achievable task, like changing the oil on a tractor. There is no emotional attachment to 30 weight.

I’m not alone in this endeavor. We all accumulate stuff and most of us must deal with someone else’s stuff at some point. George Carlin has a good bit on “our stuff” and how it’s valuable, but other people’s stuff is, well, I’m sure it’s on YouTube, and it is by George Carlin who has another famous bit on seven words you can’t say on television. Suffice to say that other people’s “stuff” is one of those seven words.

My maternal grandfather ran a wholesale distributing business in the 1960s and 1970s supplying regional grocery stores with dry goods. He started as a salesman for Lever Brothers soap, was good at it, and expanded his offerings to all the things in grocery stores that you don’t eat. School supplies. Shampoo. Brooms. Careful observers of our own business, Lost City Knits, may have noticed the wooden boxes that hold our Jamieson & Smith yarns. Those boxes are imprinted with “Yeager Wholesale” on the sides and have been with me in all stages of my life, from ramps for jumping bikes to carrying college textbooks to holding Denise’s yarns.

She worked alongside him. She was quiet, like I am, and my grandfather could be boisterous in meetings. Everyone knew who the boss was. But often in meetings a question would come up, he would lean to my mother, she would whisper her thoughts to him, and a decision would have been made. She had a quiet power.

My mother ran the school supply division of Yeager Wholesale, and developed her own line of supplies called Jubilee after a racehorse whose name she liked. There were Jubilee spiral notebooks, binders, notebook paper, and pencils. 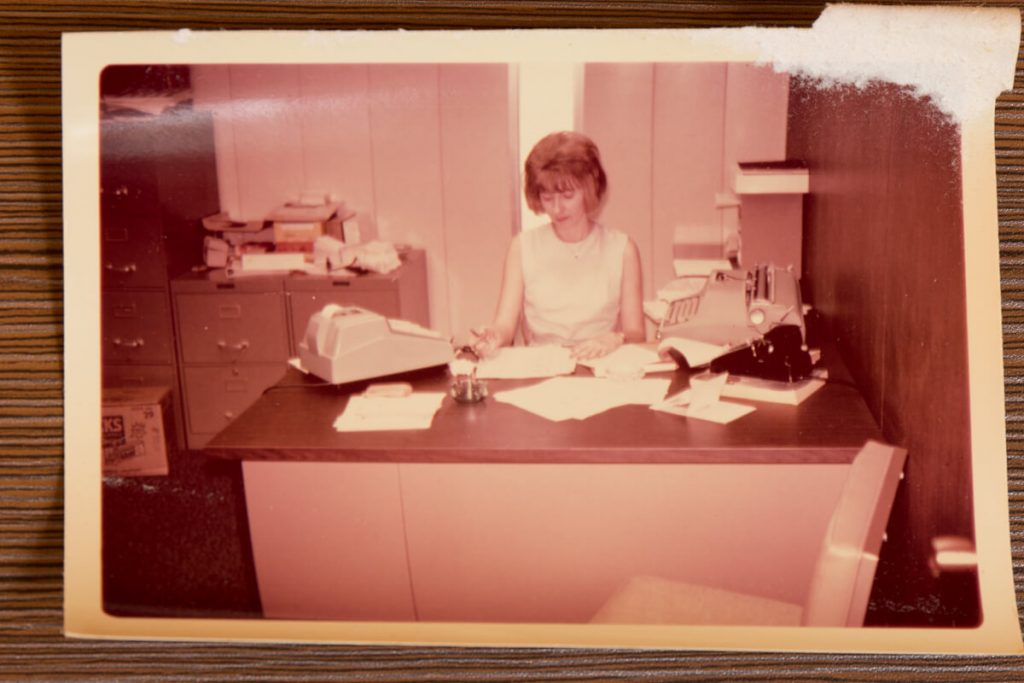 As a promotion in the 1960s, Jubilee ran a contest by which people collected coupons from Jubilee products and redeemed them for prizes. Greenstamps without the cache.

Last week I stood in the barn and a box caught my attention. “I’m going to deal with that,” I said to myself not knowing what it contained. I opened it up to find a stack of letters schoolchildren had written to Jubilee requesting prize catalogs. My mother had saved them. 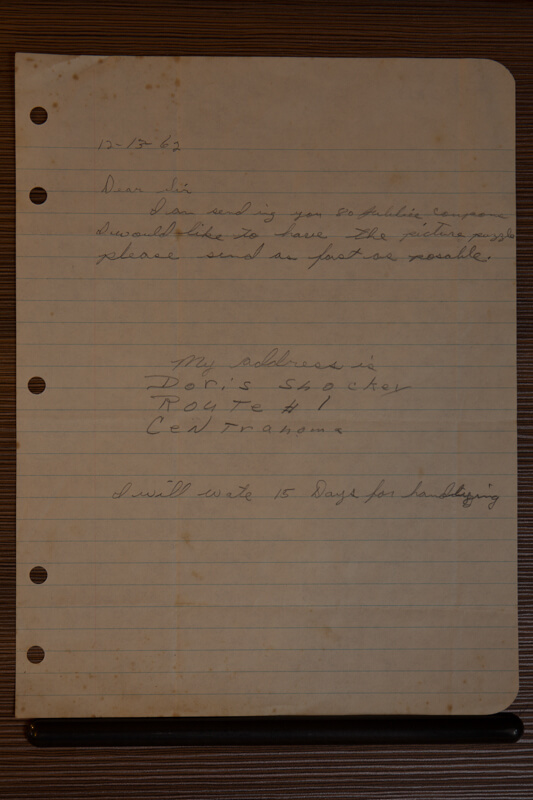 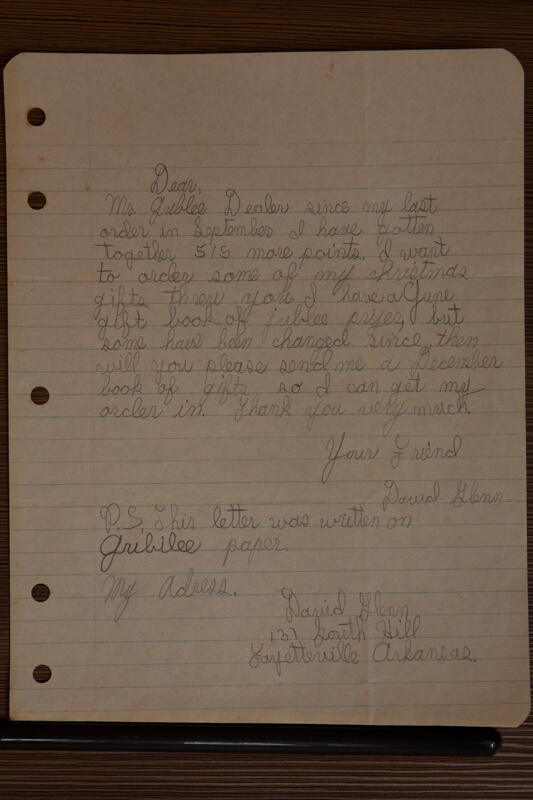 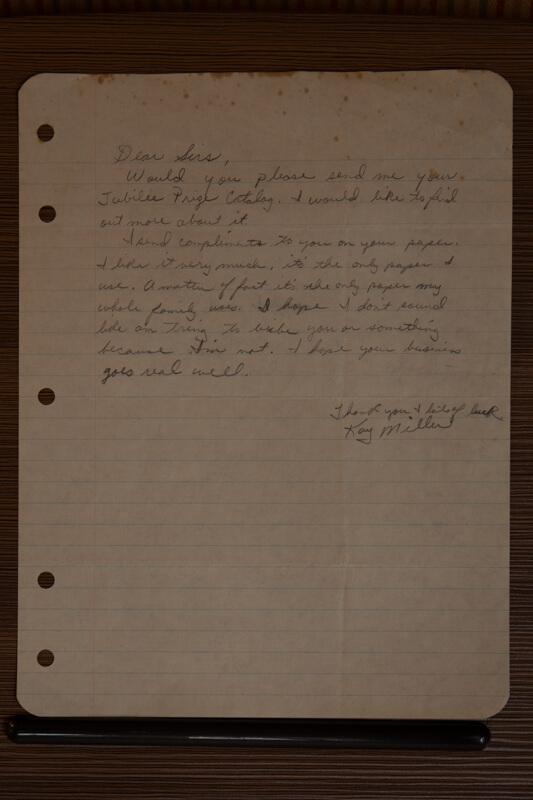 “Dear Sirs: Please send me the 3-Ring Loose Leaf Notebook for 200 coupons. I sure do like your prizes. Somethings I wouldn’t be able to get if it wasn’t for the Jubilee Company. Thank you very much. Linda.”

“Dear Sir: I have been saving Jubilee Coupon for a long time. I had a whole box of them one time and my aunt came to stay with us and they were in a card box and she thought it was just an empty box and threw it away. I want a Jubilee Prize List showing many more valuable and useful prizes. Yours Truly, Wayne Whitehead. PS – My name is Wayne Whitehead and I am 12 years old. I am in the sixth grade. My teacher’s name is Mrs. Culver.”

And several dozen letters just like these. Not one, I note, was addressed to Madam.

There was a Jubilee spiral notebook in the box, and some photographs from the early days of the Yeager Wholesale Company’s new location outside of the city limits of Tulsa, where it expanded after a fire destroyed the warehouse that was in downtown Tulsa in the early 1960s. 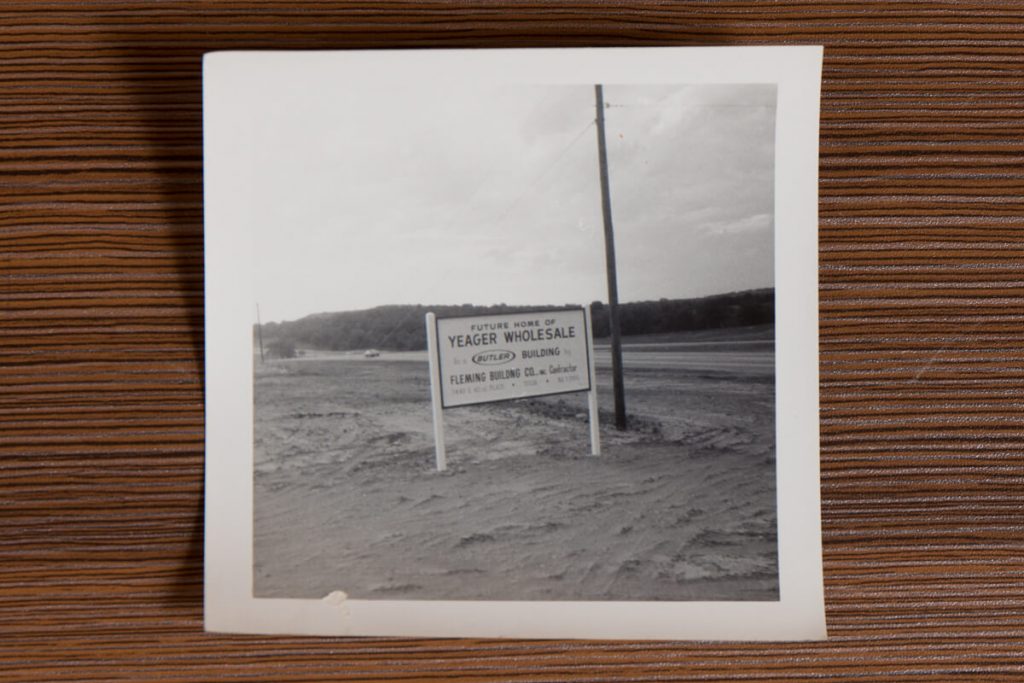 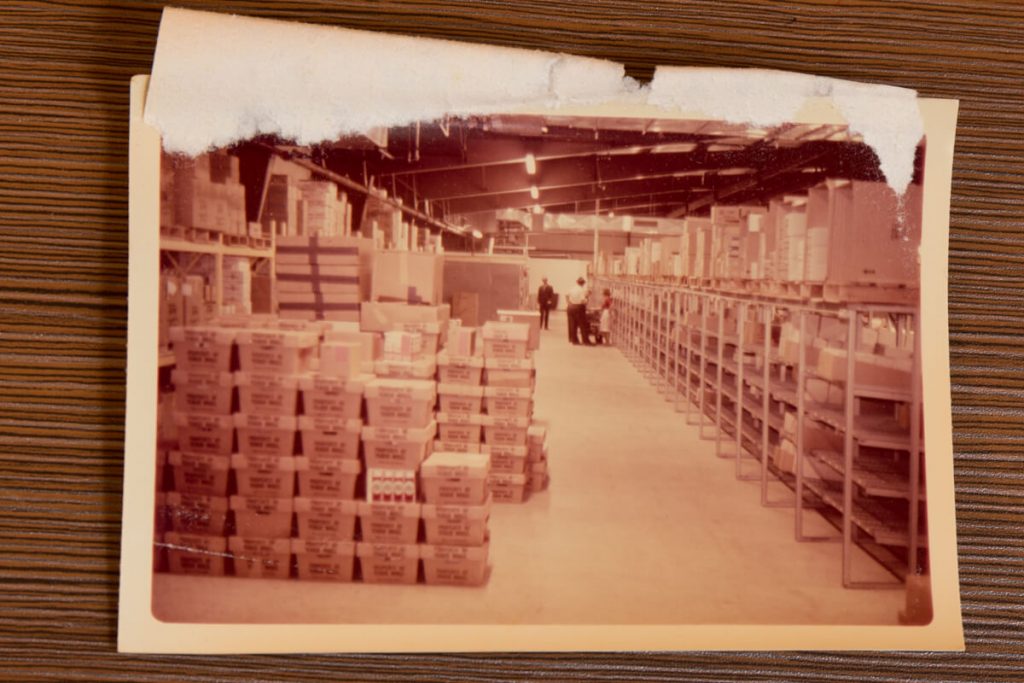 What to do with these letters?

As one does when faced with a decision requiring effort, I put the box down and opened Facebook.

There I saw a post from my friend Robyn who was struggling with the same work. Her mother died 25 years ago that week, and she was making a concerted effort to deal with the collections of a life. 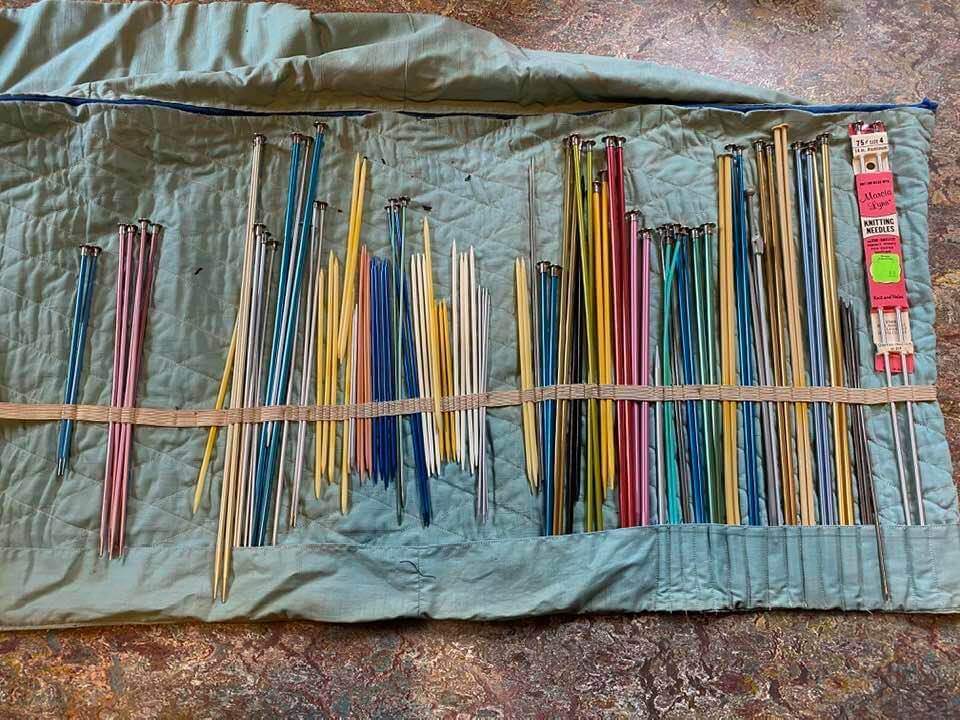 “This I can handle,” I thought. “I know some knitters.” Denise said there were some needles there she could use. I quickly responded that we would take them. Robyn admires Denise’s work and was thrilled at this development.

Stumped on Jubilee, I enthusiastically set about distributing Robyn’s mother’s knitting needles. Denise took some old Boye DPNs and scored a great knitting manual from the 1940s. I requested information from some of the other people who expressed interest, and one by one I got a few addresses in Messenger. One lived just a few miles away from Robyn, so I left a few DPNs on her porch while she was at work. Lynett lives down a road I’ve seen but never explored, so I’ll make a detour soon to leave her some single points. She said she wasn’t picky. Barbara is teaching her daughter-in-law to knit and would like whatever. I left a grocery bag with some large needles for Jeff the potter, who assures me that when we can all get together again he’s going to brew 50 gallons of coffee and have everyone over. He requested that Denise bring whisky.

I did for Robyn what I wish we could all do for each other regarding our accumulated stuff. I know knitters. (Actually, everyone that spoke up is someone Robyn knows. These needles never saw the Lost City Knits light of day.) But I saw something that I could do and set to it. That’s one thing done…

I considered tracking down some of the people who had written letters to Jubilee and giving them the letter and a notebook. A sixth grader in 1963 would be around seventy now. I spent a few hours online and found a few obituary notices.

Then I thought that to come full circle I should find a child or grandchild of one of these people and pass the letter back to them.

But then I thought better of it. That would be passing something with an emotional burden onto someone who wasn’t expecting it so that I can feel better, feel that I’ve done my job. It wouldn’t be fair.

My job is the job Robyn is already ahead of me on. She found something that was a connection to her mother and freed herself of it in a way that benefitted willing recipients. And she was even savvy enough to have someone else do the legwork.

The box of letters to Jubilee rests here on the coffee table. I have made more of it than it actually is, but it has permitted me to recall a time and some people, and to write in order to figure some things out. I appreciate that for over half a century no one bothered to dispense with them, and that I get this moment, but I also appreciate my own moments of my own doing, and these letters are a hindrance.

Denise, Elizabeth, Lynett, Barbara, and Jeff will put Robyn’s mother’s needles to use.

Doris, I hope you enjoyed the picture puzzle. May I now sweeten the deal with some dishes?