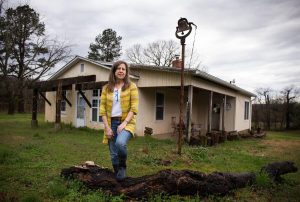 Several times in recent years I’ve had the experience of narrowing down my life in times of crisis. I think of it as cutting out the frivolities, focusing on the essentials, getting to the basics of human existence both physical and emotional. Through them, I’ve knit or done some sort of handwork. As Elizabeth Zimmermann said, “Knit on with confidence and hope through all crises.”

Almost five years ago my father-in-law Paul had several heart attacks, which began his decline. After initially attempting to continue our Lost City Knits workload, Chris and I decided that what we really wanted to do was to stay home and care for Paul in his farmhouse here. Things began with aid from home health care, then when the time came, home hospice.

Throughout these months I continued knitting. I carried my knitting back and forth across the farmyard and barnyard between our two houses. I would schlep a meal in a cardboard box between houses with my knitting bag hanging from my shoulder. Several of the designs for our first book, Ultima Thule, were in progress and provided distraction in the early going.

One evening in April I decided to cast on something just for me, not as a publishable design – just something for my sanity. I pulled two skeins equaling 1200 yards of fingering weight handspun merino – a gift from a dear friend – from the stash and wound the two balls. Using Elizabeth Zimmermann’s Percentage System, I calculated a stitch count to cast on and began going round and round. There is a splendid subtlety to knitting with well-done handspun. Slight shifts of color and ever so slight textures exist at a heightened level in a handspun stockinette garment worked in the round. They are both so very soothing.

I sat many hours knitting beside my father-in-law. He would watch the progress of my work, usually without comment, but occasionally he’d reach out and touch the wool or raise his eyebrows at a color shift or ask a question. If a nurse’s aide showed up, he’d tell them to look at my sweater, a guise to move the attention from him to my handwork. One nurse aide had basic knitting skills but when I told her I intended to steek the front she was stumped at my use of the word, so I demonstrated on a swatch that happened to be in my knitting bag. I didn’t prep the swatch – I just cut it up the middle and watched her jaw drop as I heard Paul chuckle.

On the morning that Paul took his last breaths I had the yellow handspun sweater in my lap as I held his hand. I’d worked it from the hem up to nearly the shoulders by that mid-June day. A few days later the sweater was complete, and I had a very tangible reminder of the time I’d sat and done little but knit in near isolation here on the farm – months of good work on several levels. If you look in my Ravelry folder you will find this sweater under the name Sanity Saving Sweater. 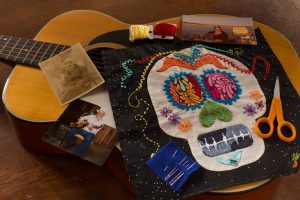 Then, a year later, my father was hospitalized after a heart attack. On the morning of the day he died I sat outside his hospital room and cast on a sweater, thinking I would do the same thing as I’d done with Paul. I thought I’d sooth my soul and save my sanity with knitting. But as it turned out my dad’s passing took minutes as I held his hand, not months, and the small start of the sweater I began that day was stuffed into a ziplock bag where it remains.

Afterward I picked up fabric, needle and thread and appliqued a few improvised blocks of calaveras – sugar skulls – as a way of dealing with the grief I was experiencing. 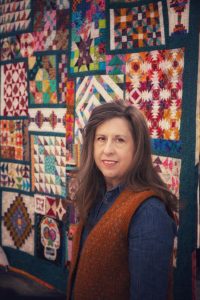 Then, late in 2019, I began quilting in earnest after a nearly twenty-year hiatus as a way to deal with the building grief of my mother’s decline from Alzheimer’s Disease. I tackled a complicated and sort of wild design called Long Time Gone by the Australian quilt designer Jen Kingwell. It contains numerous types of pieced blocks – Ohio Stars, Log Cabins, Around the World, Flying Geese etc. All in small format. Some finished blocks are as small as 3” square.

I spent several months working on the quilt, and at some stage decided to incorporate the calaveras blocks that I’d appliqued after Dad’s death that had been stacked for safekeeping. Encouraged by family and by my knitting and quilting friends, I entered the finished quilt in the local Modern Quilt Guild show. It was not the fanciest or best quilt in the show this year, but I think it was the only one with sugar skulls. A few people stood and studied it. Some did not give it more than a moment’s look. Both are appropriate responses to a very personal project.

Through these three crises, the latter ongoing, I’ve worked with my hands. The handwork is meditative, creative, and offers a satisfaction when other parts of life are in upheaval.

How will you spend your creative energies in the coming weeks, or months, of isolation?

Of Notebooks and Needles
December 2, 2020
Subscribe to our newsletter
Go to Top