Nothing about the Shetland Islands is pretentious. The stark beauty of the landscape, treeless except for windbreaks homeowners have planted, goes on and on. A collection of homes along a bay. A ruined stone structure. A fuel station, open Sunday from two until five. Rocks in a field, divided by the other rocks in another field by a fence made of…rocks. Sheep. Always the sheep.

But Denise was nervous about the company we’d keep for the next few hours. She’d been invited to attend a guild meeting of knitters in a land famous for lace and colorwork, which stands in contrast to the horizon’s simply beauty. “What if they think I’m not any good?”

We arrived in the late morning at the community center at Voe, a little more than halfway up the mainland. The other knitting guild members had not yet arrived, and Denise and I had held true to our habit of being among the first ones at an event. We found the little room where the knitters would meet, and a woman was arranging folding chairs in a semi-circle. By the time everyone was there, chairs would be added to accommodate everyone, and the circle would be complete and pushed out a bit. 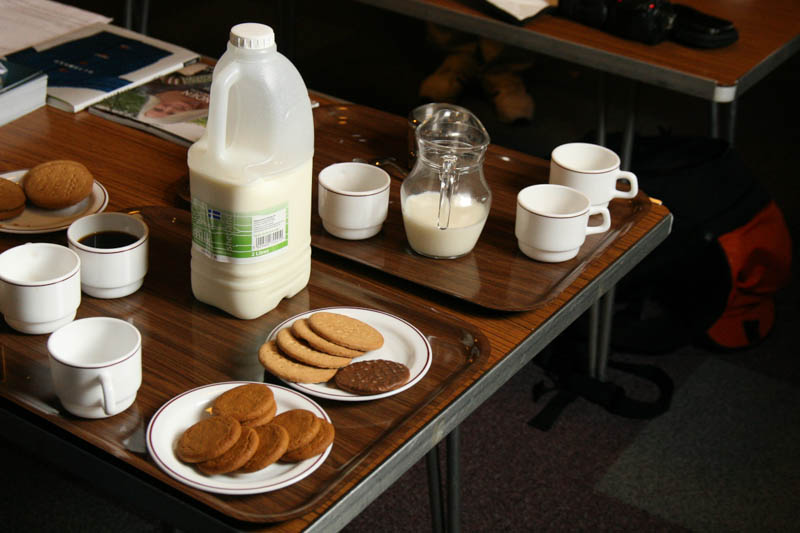 People began to come in and take seats. Almost everyone wore Fair Isle jumpers, and no one ever asked if they had knit it themselves. No need.

As the room filled, a short, white-haired woman in blue Fair Isle walked in carrying a bag of cookies, and the room quieted a bit. This was Hazel Tindal, who, while quiet and unassuming, has become sort of the face of Shetland knitting and an ambassador of the annual Shetland Wool Week in October. 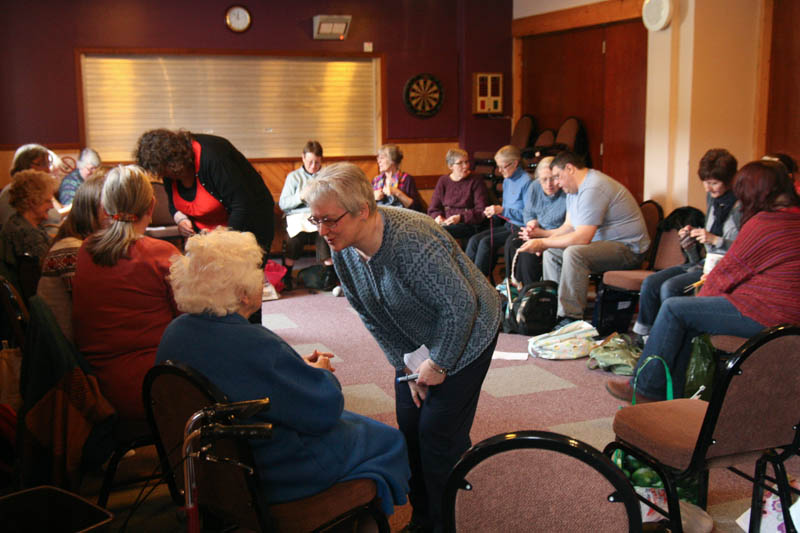 Also, Hazel Tindal can knit faster than you. So can everyone in the room, likely, but none of them can knit as fast as Hazel, who holds the title of “World’s Fastest Knitter.”

Hazel welcomed everyone, introduced the seven visitors, and everyone began knitting and talking with each other.

Almost everyone knit using a belt that held a leather pouch stuffed with horsehair off to one side. Into that pouch stuck a long needle, perhaps 16 inches long, which acted as the working needle. Both hands were free to work and not hold that needle. The speed was impressive. 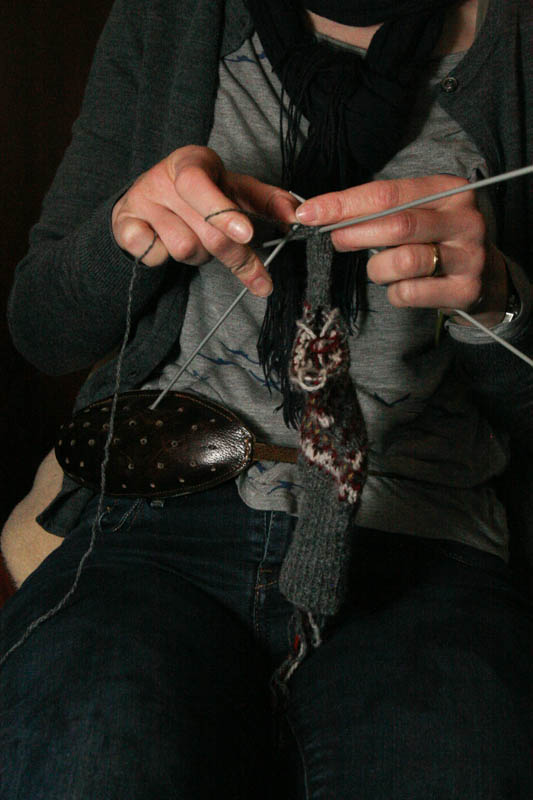 Between the two of us, we probably spoke with everyone there. Most people couldn’t recall learning to knit. They’d just always done it. Some worked from patterns, but others just winged Fair Isle motifs as they were going along. Some were inspired by color, others from patterns they’d seen and decided to riff on a little, so pretty much like most accomplished artists, there is some inspiration and some imitation.

Denise need not have worried. People commented on her Scatness tunic, freshly off the needles, and she showed her newest design, which is in progress. The Shetland knitters were glad we came, happy to see interest in colorwork and lace, but one shouldn’t hope to impress them much. They’ve been doing the work for generations. 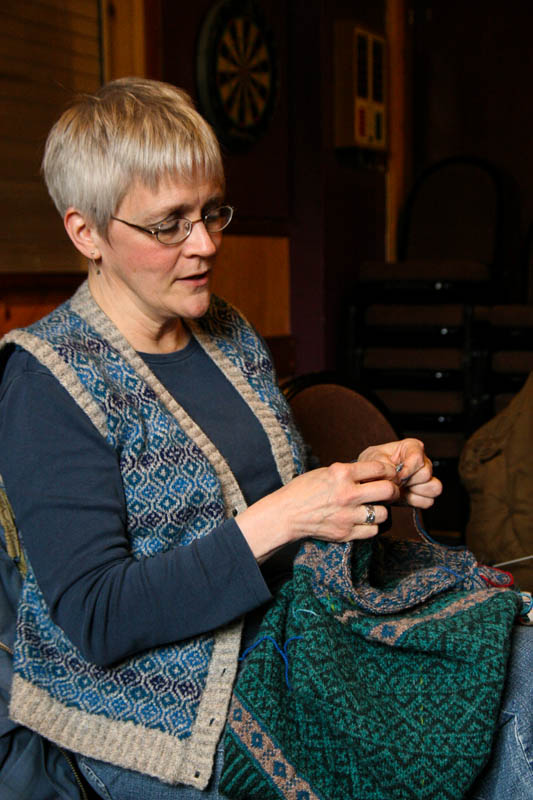 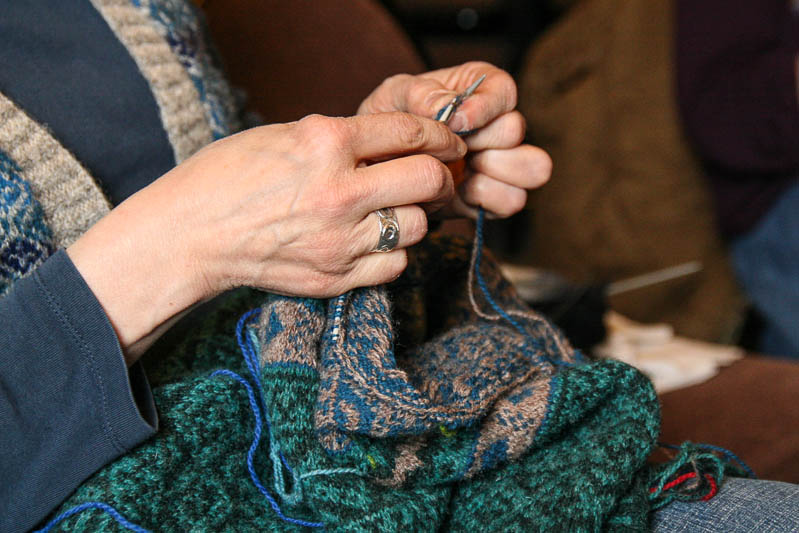 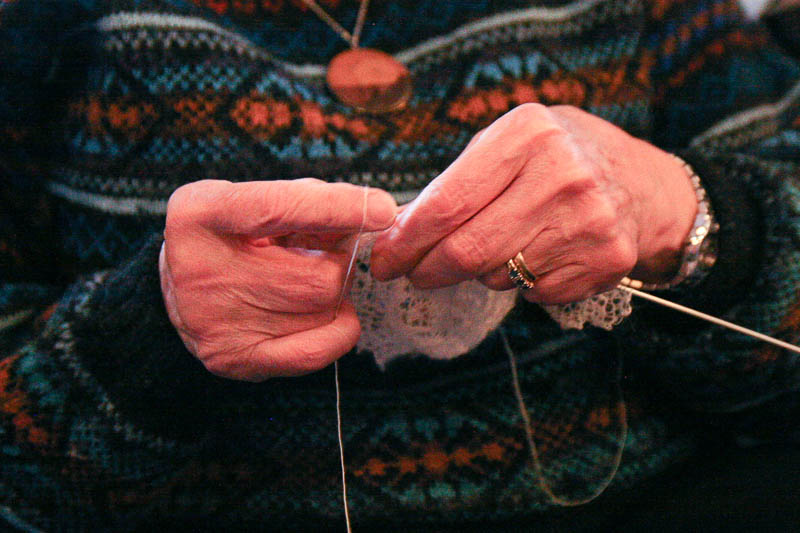 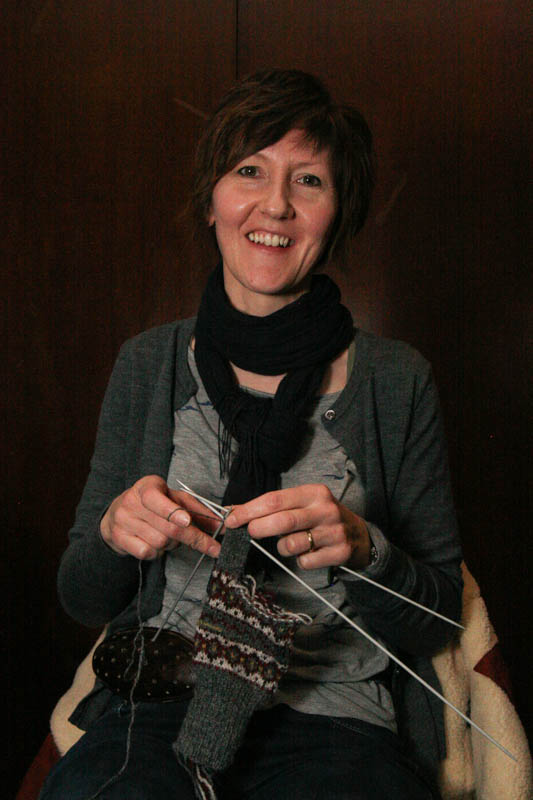 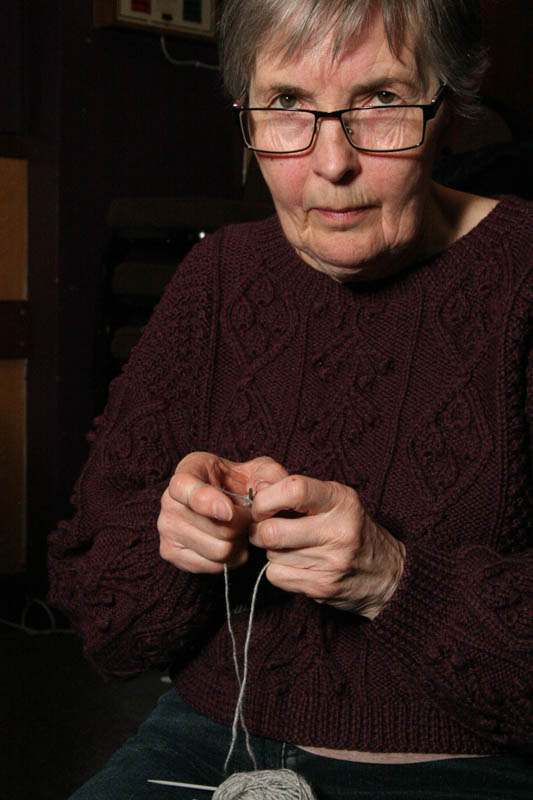 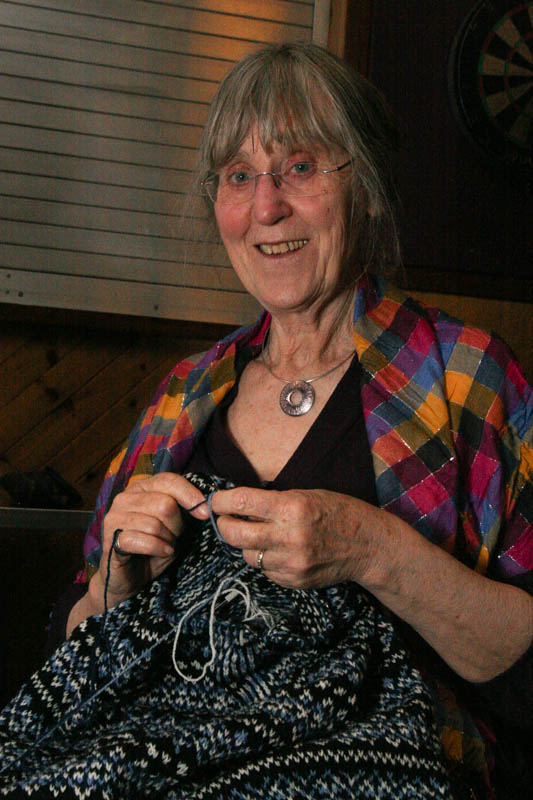 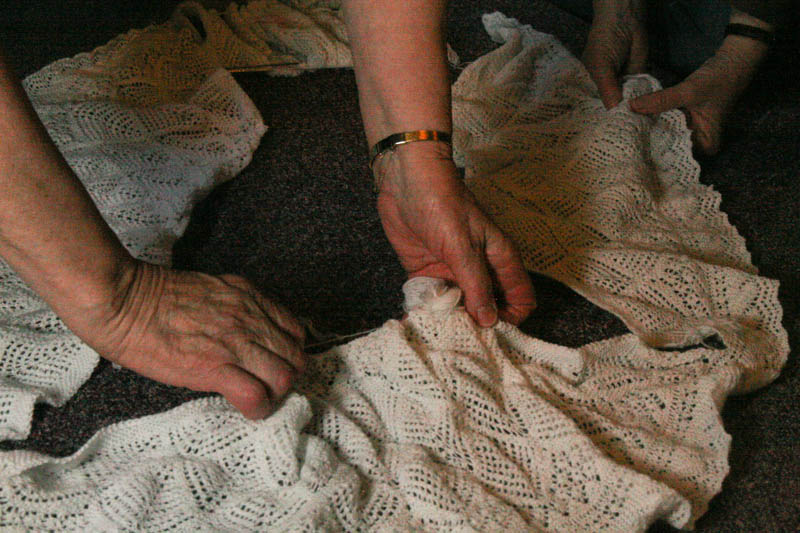 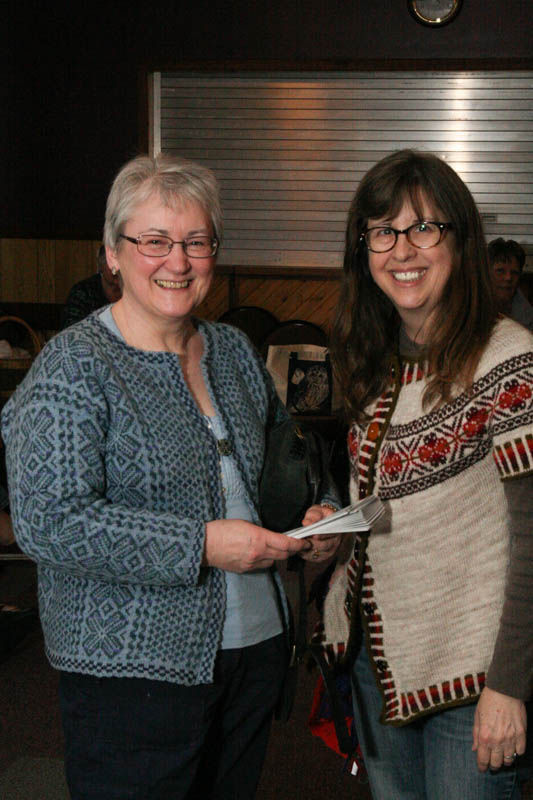 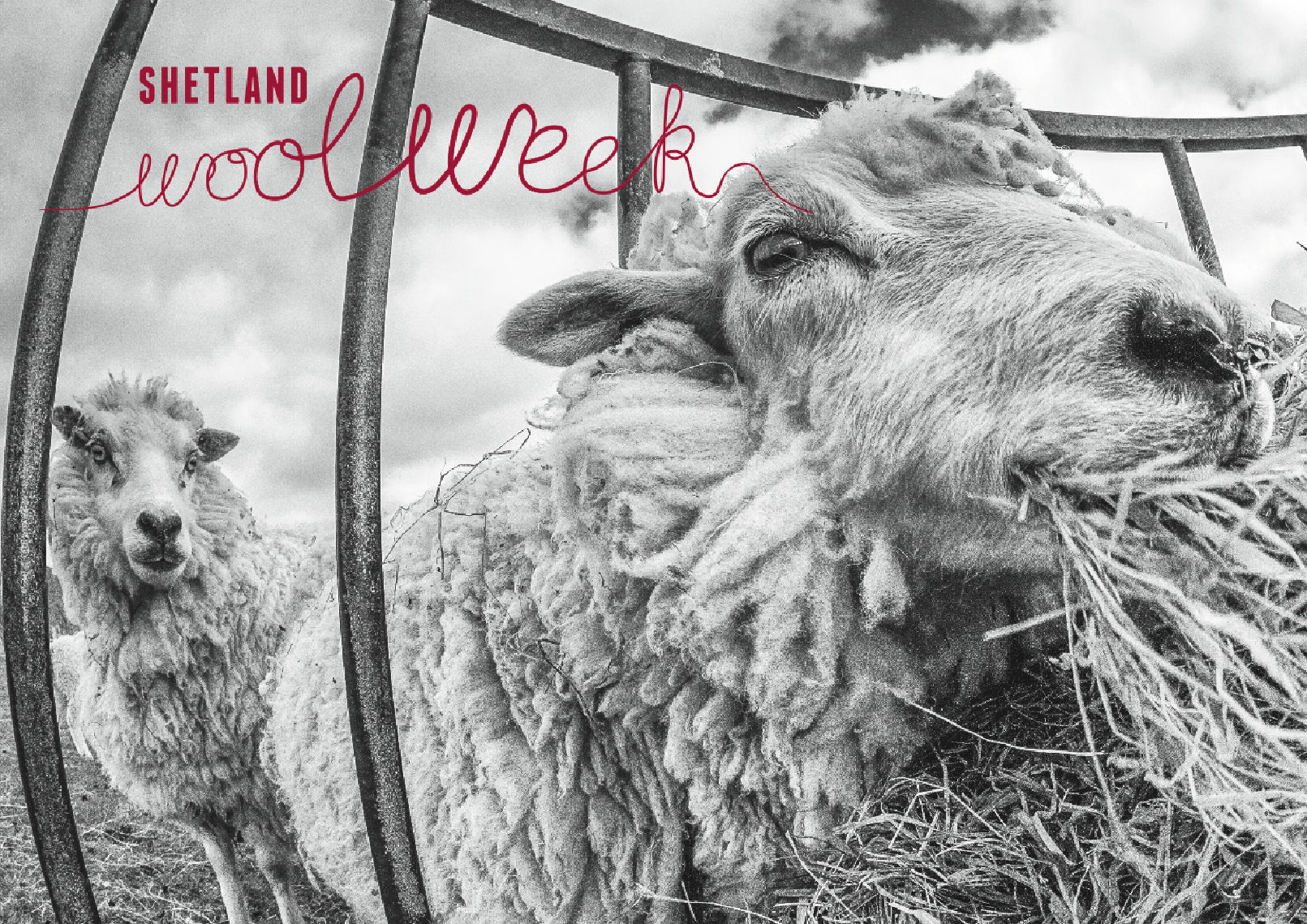