Shetland Part Four – Not at all knitting related.

When we are at home there is always something that requires my attention at the farm and Denise is always either elbow deep in a dyepot or sketching on a new design. We get into our grooves and work. When we get a little burned out we have to remind ourselves that we have an out, and for us that out is often a little kayak trip on nearby Fort Gibson lake. We usually go to a little cove where Clear Creek empties into the lake, and we can paddle up to flint bluffs and sneak up on wildlife.

So, when I saw that there was a sea kayak guide on Shetland we carved out an afternoon away from mills, lace, and colorwork.

Angus Nicol was born on Shetland and has been a guide for ten years. He lives next to a golf course, which sounds extravagant but isn’t. He doesn’t play golf. He kayaks and uses this semi-stealth mode of transportation to get close to and better understand nature.

He put us in kayaks that were much longer that the ones we have at home. Unlike recreational kayaks that don’t see much in the way of wind and surf, sea kayaks have to be able to cut through or ride waves, track straight against strong wind, and offer stability in currents. Our boats were probably about 17 feet long and maybe two feet wide. We put in off the coast of West Burra and once we learned to move our hips and rotate our torsos in harmony with the boats we were off. 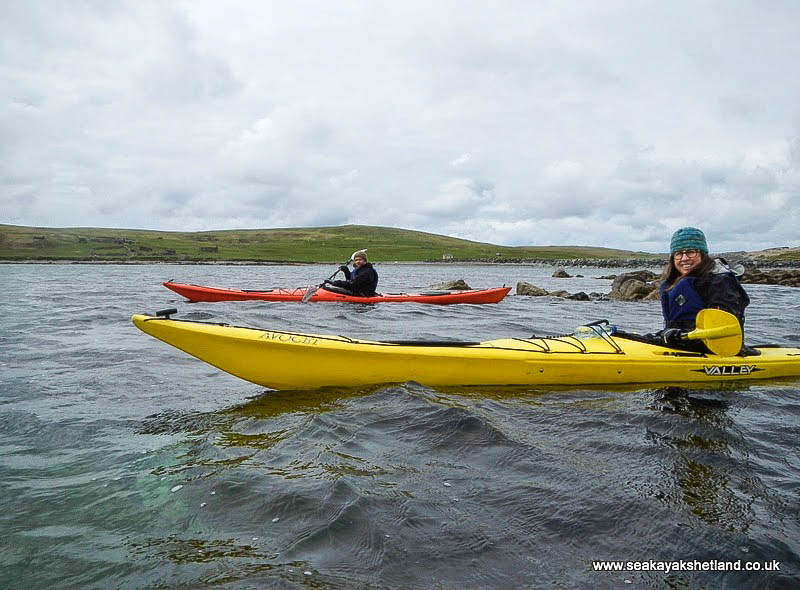 The little inlet was calm, and Angus steered us towards stone home ruins that he said had been inhabited perhaps fifty years earlier. They looked as though they had been empty for centuries. Sheep shuffled amongst the ruins, oblivious to kayakers.

Not oblivious, however, were seals. We came upon six or seven seals lounging on a rock, and as we approached they took to the water, swam out a few yards, and watched us watch them from a safe distance. For the rest of the afternoon it wouldn’t be uncommon for a seal head to pop up close by. 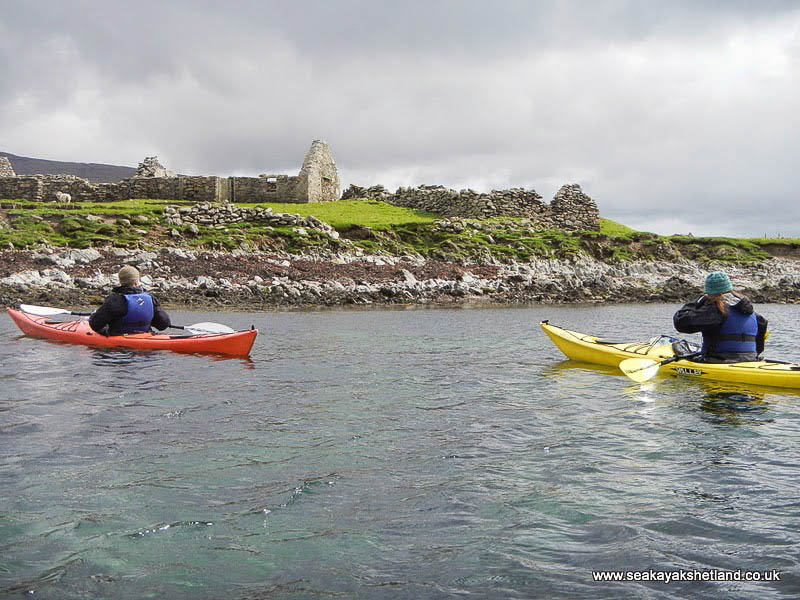 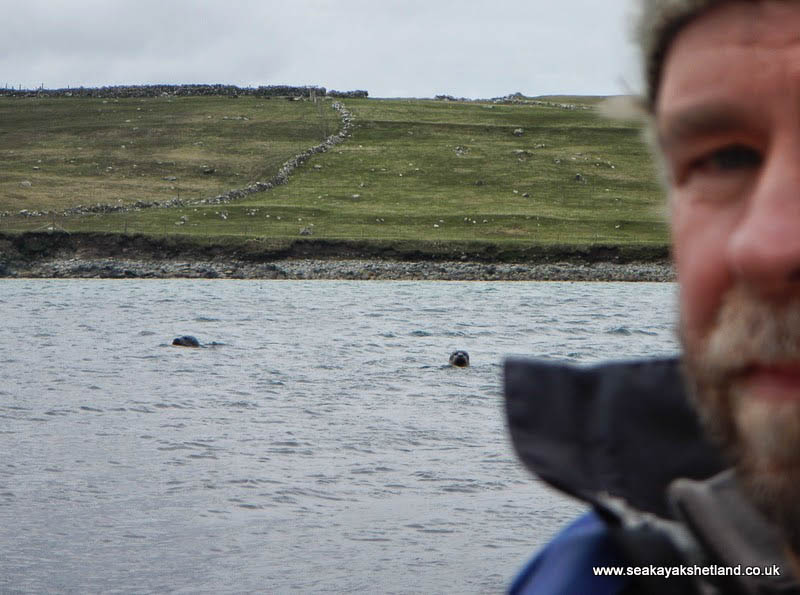 We began to paddle around the southern half of the isle of East Burra. Cliffs towered overhead, and as we rounded a point the water began to swell. Angus pointed to open water. “That way…the next land is Florida.” We were on the edge of the Atlantic. Swells were about 5 feet, and we were out well past where they were becoming waves. Still, it was a fairly wild ride for two people with only lake experience.

We paddled amongst some rocks, rising and falling with the water, taking turns that seemed sharp but were aided by the design of the kayaks. Angus disappeared into a cave and I said to Denise, “Can you even believe we are here doing this?” “NO!” she yelled, laughing as the waves lifted and dropped her kayak. Angus reappeared and motioned for us to follow him in the cave. We couldn’t go all the way through at high tide , so at one point we all had to turn our 17 foot kayaks around in a 25 foot wide cave. 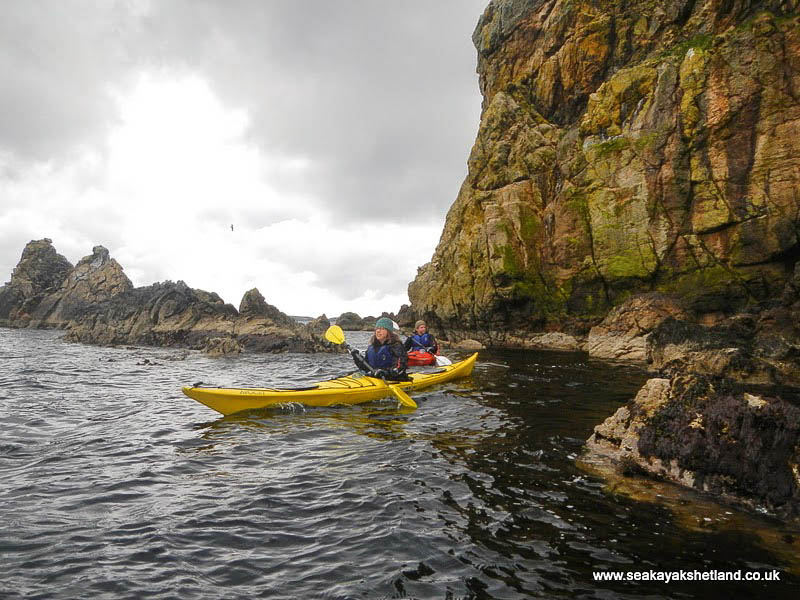 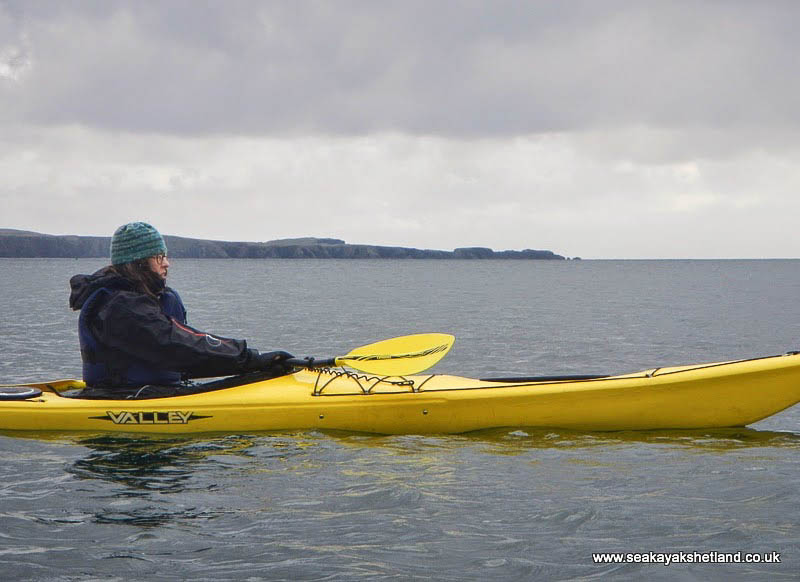 Ever mindful of his charges, Angus monitored our comfort and pushed it a little, all while giving a running commentary on geology, wildlife, history, and customs. A puffin landed on the sea 50 yards away, and Angus advised to approach it in a zig-zag pattern, as paddling directly towards puffins frightens them off. I looked skyward at a cliff, pointed to a fence hanging off of it that I said might need some attention, to which Angus said, “Oh no…it was built like that. The sheep will still get around it. Occasionally I’ll find one in the water that has fallen. The last time that happened I had a veterinarian with me. He looked at the sheep and we gave it back to the crofter.”

After one small portage of the kayaks over a fence we were in sight of Angus’s car and kayak trailer. We’d been out for maybe five exhilarating hours. As we made our goodbyes I said, “The problem is, now we have to move near the ocean.” 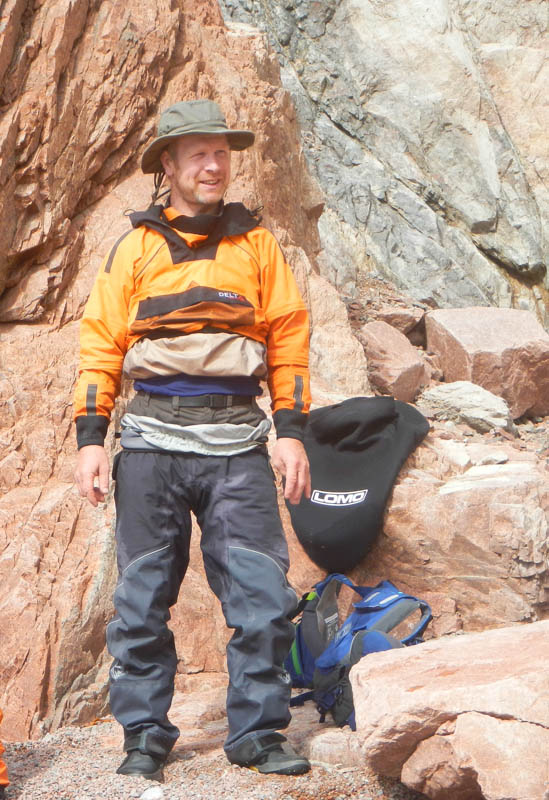