Shetland Part One – Arrival and Quest for Unst Lace

In the Fall of 2013, as we could see a busy year for Lost City Knits wrapping up, Denise and I discussed the possibility of a big trip. We usually get away for ten days or two weeks for a road trip, but it had been awhile since we’d had a big adventure. “Where would you like to go?” I asked.

Hmmm, Scotland in December. “Where in Scotland?”

Being that far north on the winter solstice does have an appeal, but for our first trip to Scotland and Shetland we decided we’d wait until spring when there would be more light.

So after a busy March and April at fiber shows we left Lost City for two weeks across the Atlantic, and furthermore, across the North Sea from mainland Great Britain.

Later we would visit the Highlands and Edinburgh, which, while good destinations, can be a bit heavy on Scottish stereotypes. This was not the case at all on Shetland. It feels more Norwegian than Scottish, and was under Norwegian rule until the fifteenth century.

On our first full day we set out on a quest for lace. We were staying in the only town of any size in the Shetlands, Lerwick, which is on the mainland, and the presence of a knitting tradition was already felt, as the B&B owners had several Fair Isle hats for sale, knit by Aunty Joan. 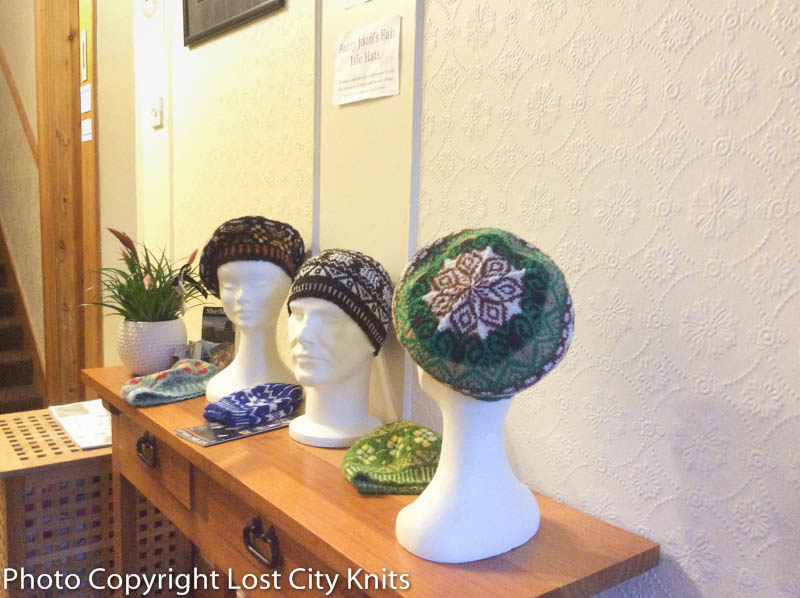 The Shetlands consist of dozens of islands, a few of which are inhabited. We kept heading north and the land got ever more rugged. By the time one has traversed the isle of Yell and caught the northern-most ferry to the Isle of Unst, there isn’t much Scotland left to discover. The terrain is beautiful, stark, and bare. We found it fascinating. 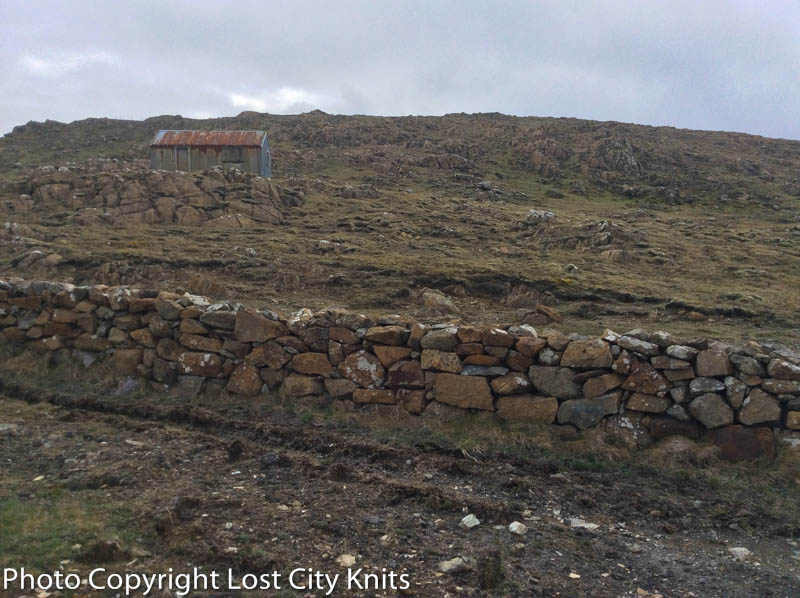 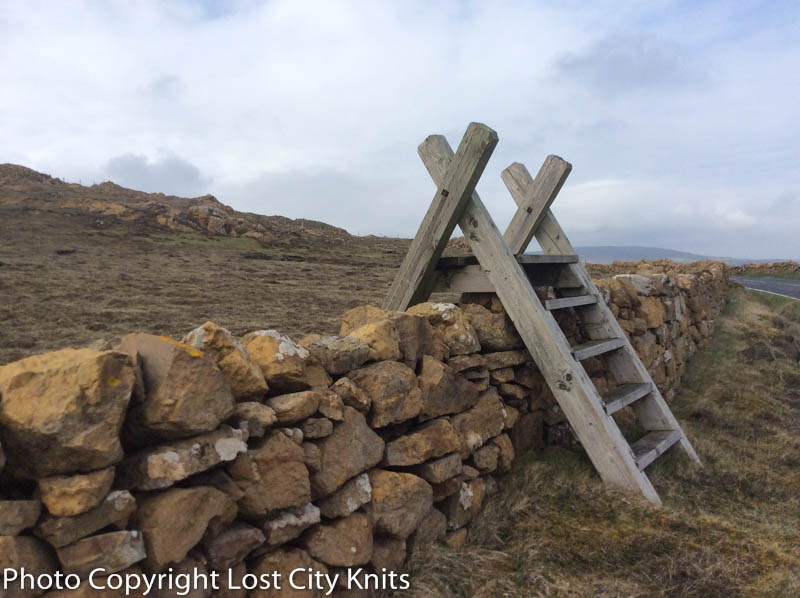 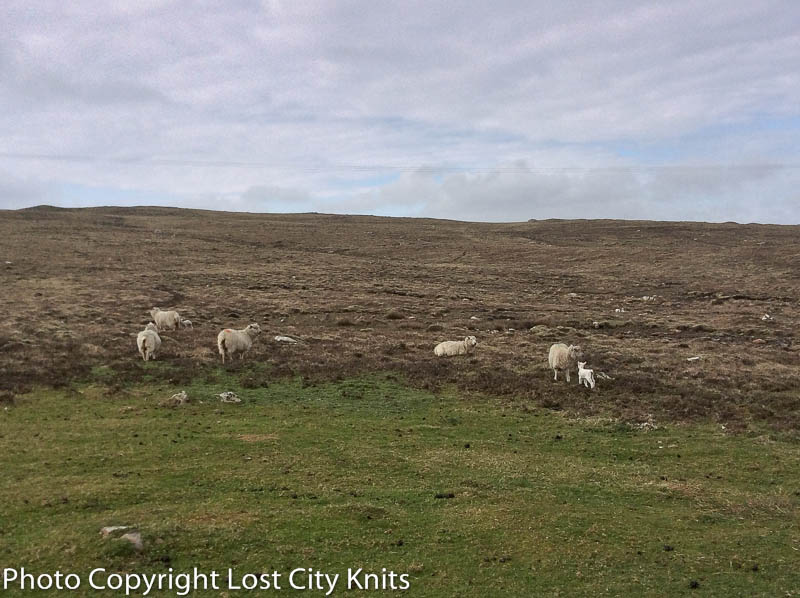 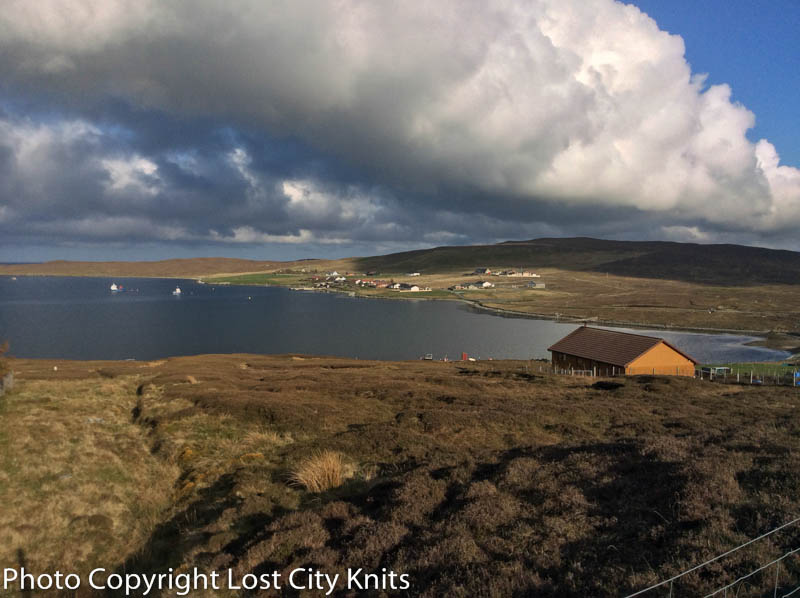 When we arrived on the Isle of Unst we headed straight for the Unst Heritage Center, an unimposing building set amongst a few modest homes. Although the sun would be up for hours this far north in mid-May, the workday was nearly finished as we walked in the museum and paid our entry fees. I turned to the right at the entry, and Denise turned left. I discovered display cases filled with Fair Isle sweaters and a few spinning wheels, so I went to find Denise and tell her that I’d probably found what she was looking for.

She, however, had gone directly to an even more impressive display of the island’s knitting traditions. Before I could say, “I found some Fair Isle,” I saw the lace piece she was admiring from behind a glass case. “I thought I knit fine lace,” she said. “My work looks so thick, now.”

The piece before us was quite impressive. Almost hair-thin yarn knit into a rectangular shawl. I frowned at the “No Photographs” sign. Rhoda, the museum’s director, came in and explained the piece’s history. It had been discovered in a trunk in a shop on the island along with a letter from the 1860s describing how a gentleman was trying to earn some money by selling his lacework. I asked for an exception to the no photographs rule, but was denied. Someone had taken a photograph a few years ago and tried to recreate the pattern, which for whatever reason, didn’t sit well with the museum. So, there are no photographs of that particular piece. However, Rhoda took the rest of the day to sit down with Denise and look at images on the museum is working on collecting for a database of its lace, and a few photos of their collection can be seen here. 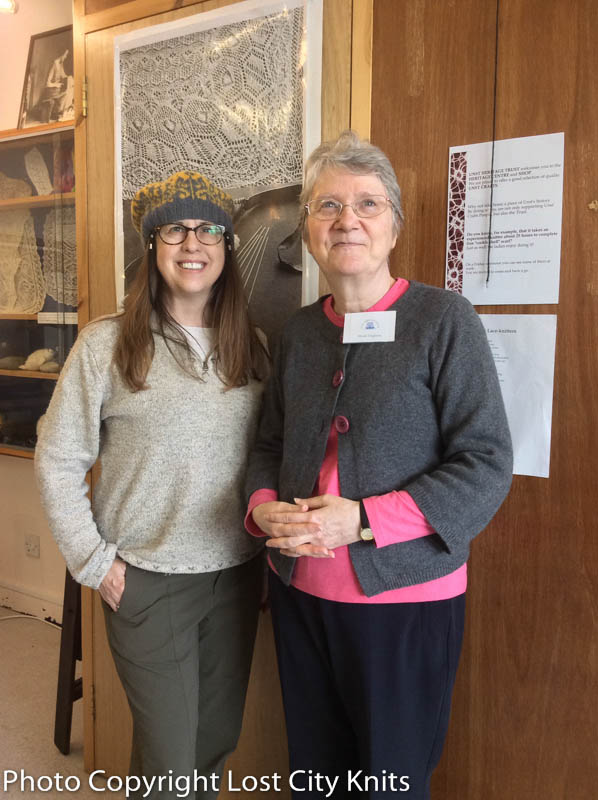 Rhoda also showed us the work of a Shetland ceramic artist, Frances Wilson, who incorporates lace into her work. 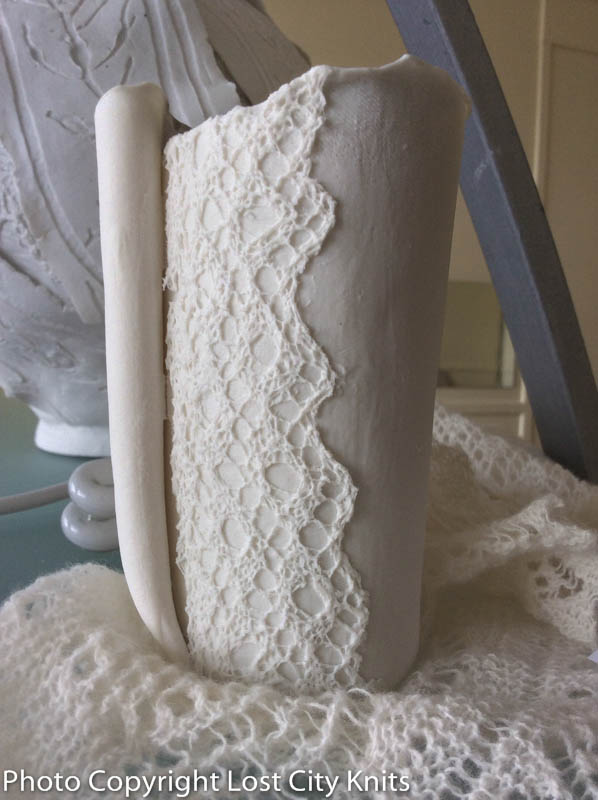 Back on the mainland of Shetland, the town of Lerwick is home to the well-produced Shetland Museum and Archive. It’s just a few years old and contains two floors of displays of Shetland’s geologic, religious, and artistic history. The knitting is on the second floor, and this time there was no prohibition against photography. It’s incredibly fine work. Also…it’s handspun. 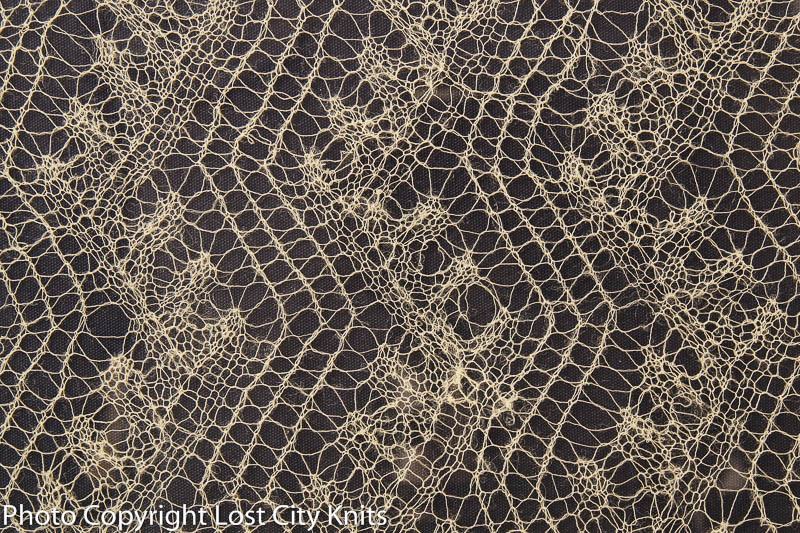 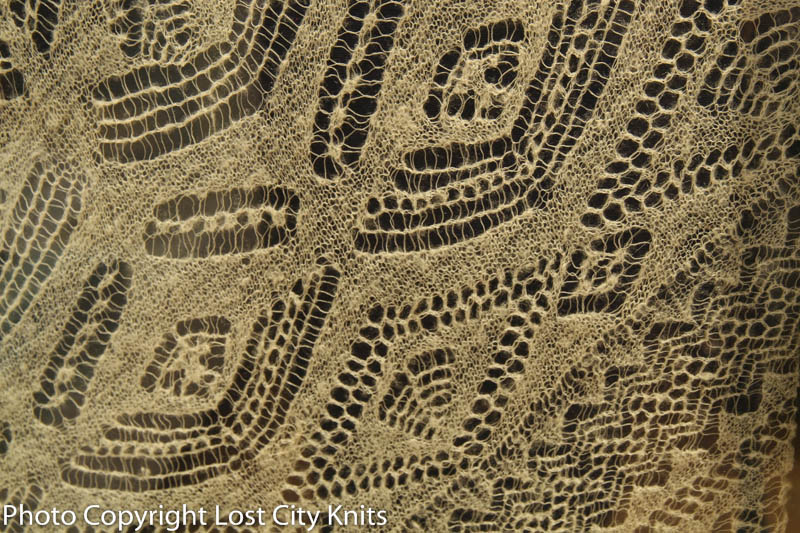 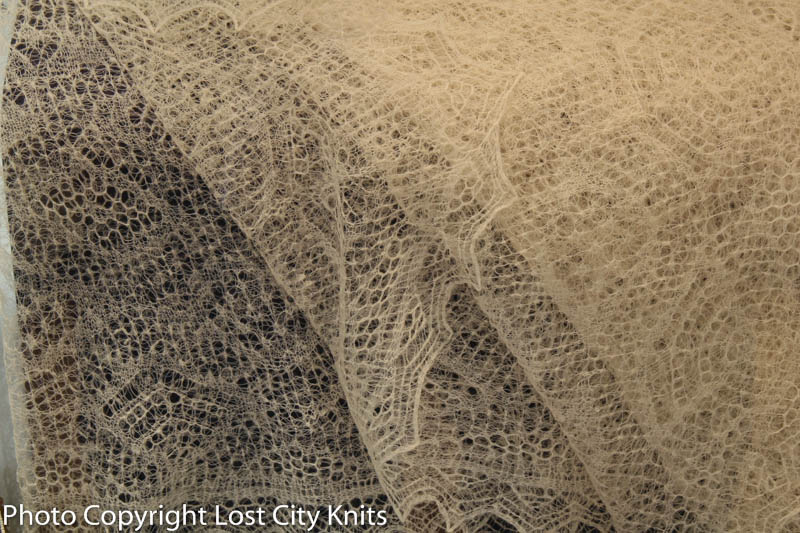 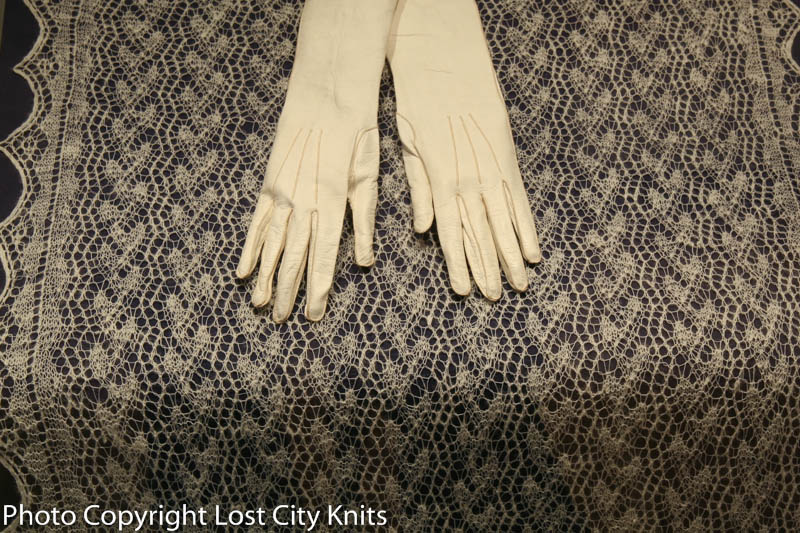 The caption of this snapshot from 1940 notes that lace shawls had fallen out of fashion and the snapshot shows a toddler wearing lace on the beach. 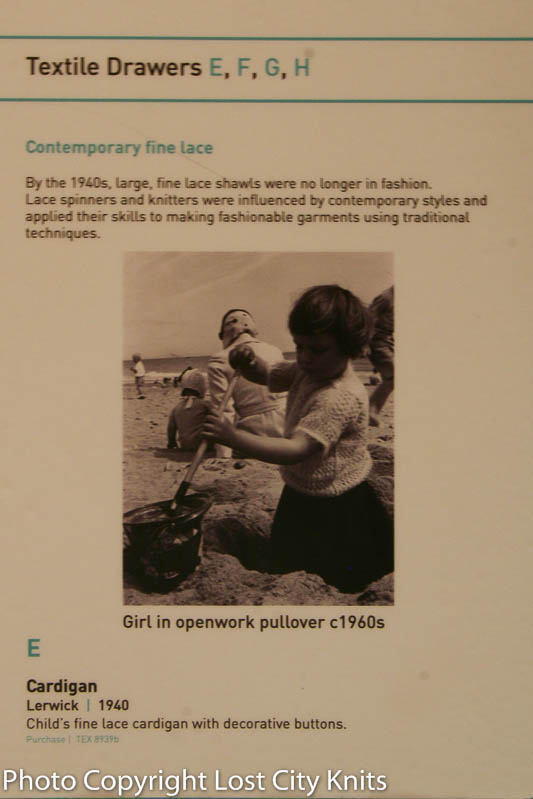 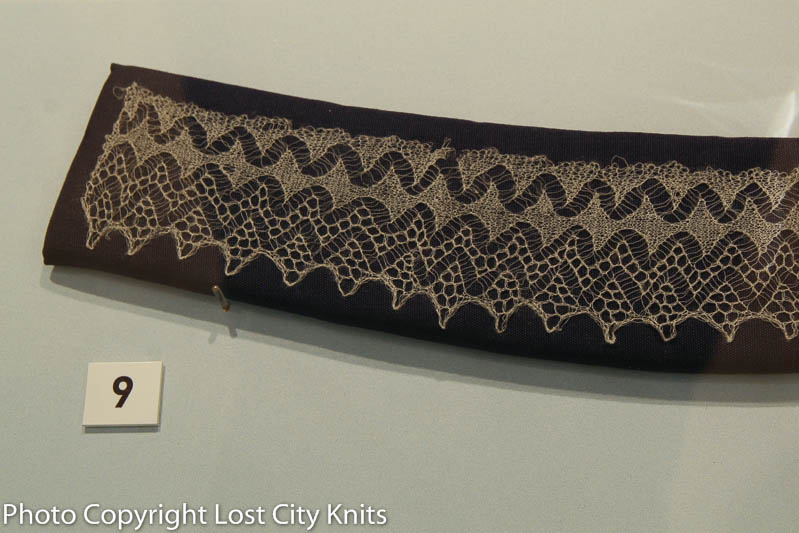 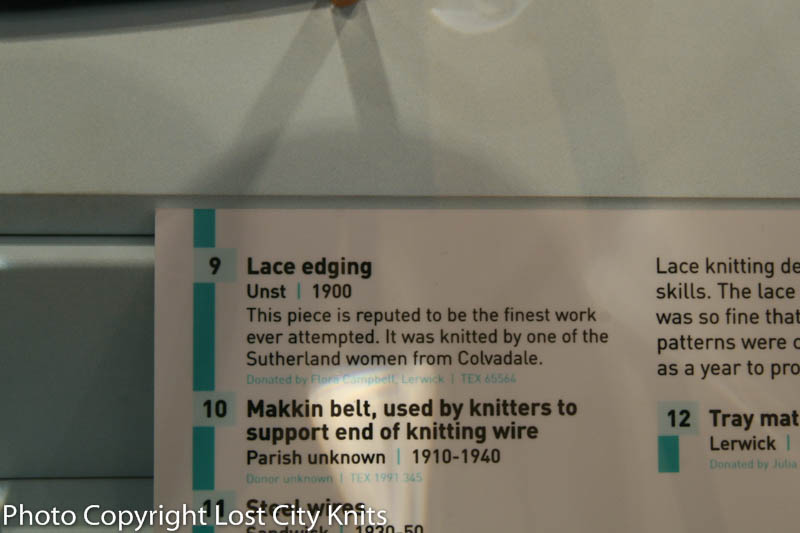 Although I am not a knitter, I find the process, people, history, and industry very interesting. Why, in this beautiful but barren land, have these traditions developed and been sustained?