As is every knitter’s prerogative, two days before the beginning of Ravellincs I switched patterns. In one clear moment I realized that the Ivy League vest, although it had all of the challenges I’d set for myself and was likely a project I could complete in just over two weeks, would never look good on me.

I’m really happy of having that one clear moment. They don’t come with every project. I’ve been known to knit things that look hideous on me and don’t fit, all despite the fact that I had a heck of a good time in the knitting process.

Finally I decided on the Scatness Tunic by Kate Davies. The pattern is from her Colours of Shetland book. Late last year I knit Kate’s Sheep Heid for a friend I know that her patterns are well written and a good deal of fun too. There was enough colorwork to scratch that itch, there were steeks, and I thought the cardigan would look pretty good on me. It is kind of a funky cardigan, not the least bit conservative, and well – it looks fun! Below is a photo I slurped from Kate’s website. 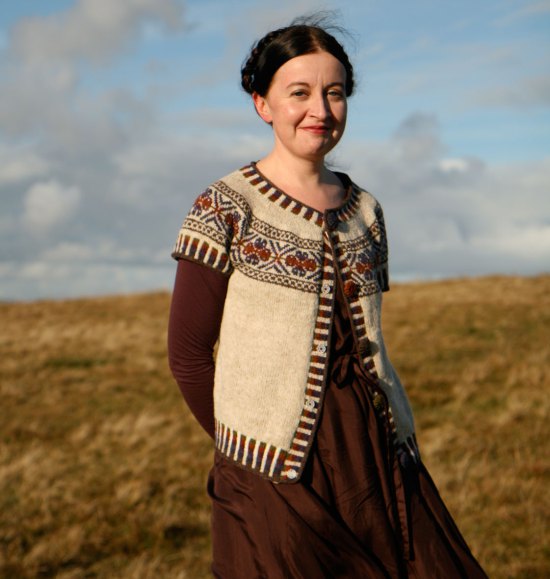 Because I’d so recently finished the Bressay Dress I was pretty sure I’d be fine using a 4US needle to get the required gauge but I was waffling on some of the colors. That’s often an issue with colorwork and it behooves anyone tackling a big project to swatch, just to make sure you’re going to like the finished colors all combined and in their appropriate places.

So the night before the Olympic Games began I pulled some of the leftover yarns from my dress, and a couple others I’d wound and did a mad bit of warm up by knitting the main colorwork pattern. I’d already decided the Latte’ colorway would make a nice main color. It’s just a wee bit of beige, barely any color at all, and therefore a good canvas to play with some strong colors against. 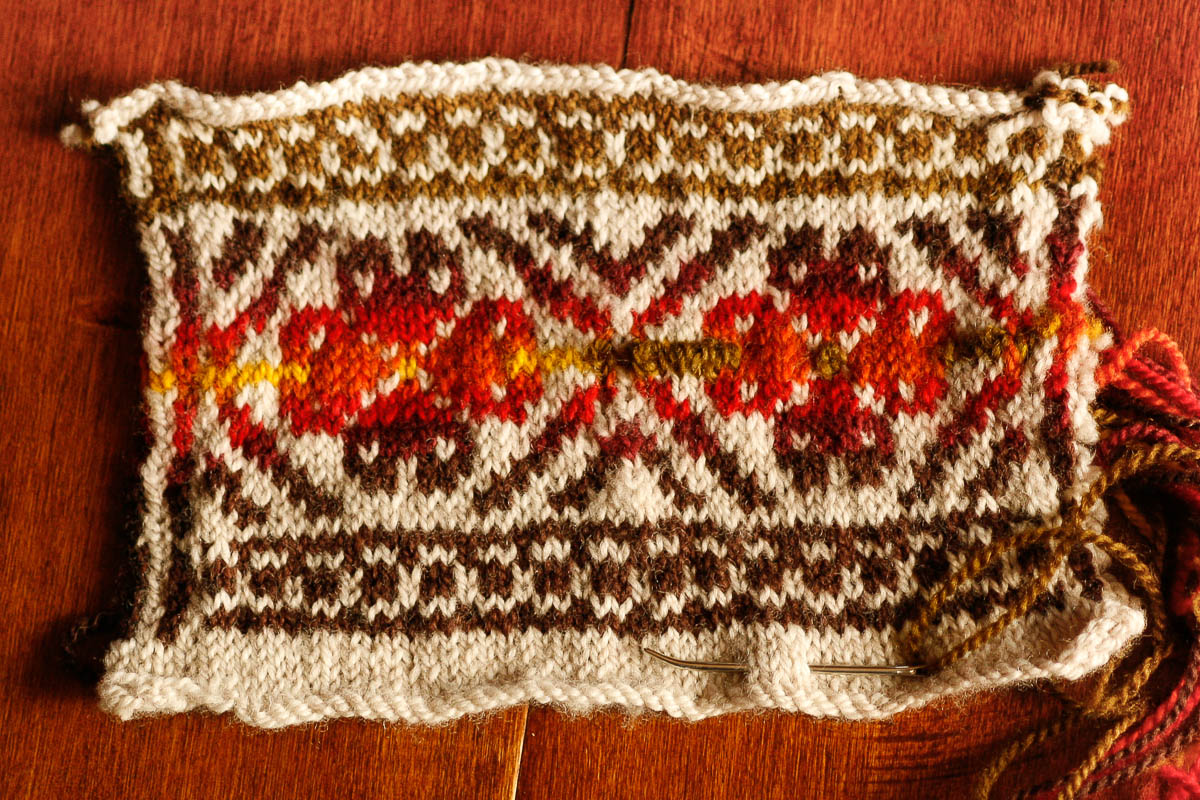 Above you can see the swatch which was knit in the round and then steeked (which I did without even realizing I was actually steeking) so I could soak it quickly and pin it out to dry overnight. The next morning I checked my gauge, found it fine, and then sat and pondered the colors of the swatch. I’d used a River Mud (a dark olive green) as one side of the border, and Hispaniola (a mahogany brown) as the other because I’d not been able to decide the night before. That was a pretty easy choice, although I did ask a few friends. River Mud won handily in my mind. The gold, called Rumplestilskin, was the weak point I thought. While bright it just didn’t have the right zing. Usually with Fair Isle patterns there is one strong color that jumps right out at you. In this pattern it should have been the yellow but the yellow didn’t play as well against the Latte’ as it had against the River Mud in the Bressay Dress. Which made me think….why not replace that yellow with the olive green? 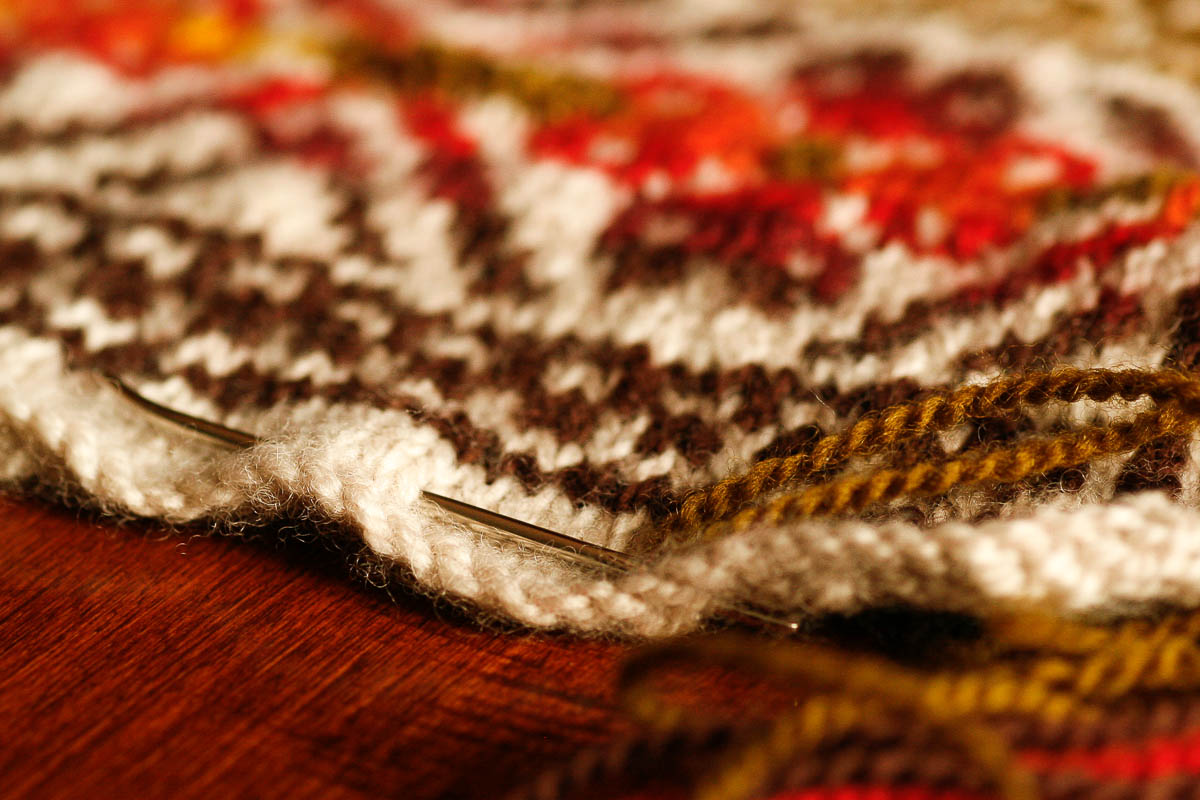 I didn’t have time for yet another swatch. So I grabbed my darning needle and did a quick bit of duplicate stitching over part of the swatch replacing the bright yellow with the olive green. Bingo! I had my colors.

The Scatness Tunic, named for a geographical area in Shetland and site of a large archealogical dig, is knit in the round from the bottom up. And it’s begun with a provisional crochet cast on. Sigh. Casting on over three hundred stitches took hours. My crochet skills are abysmal. Two days later I’d finished the ribbing at the bottom of the sweater and started on the miles of stockinette in the main color. 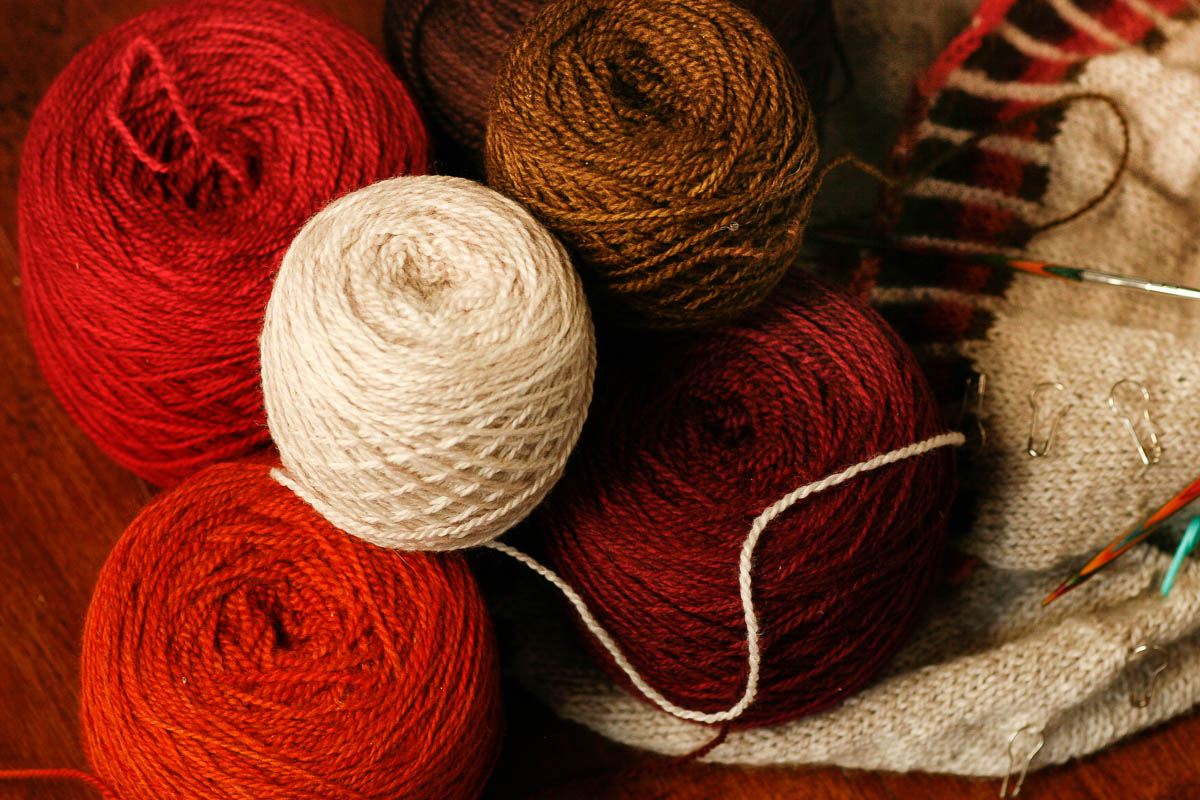 Unfortunately I suddenly had a go round with a virus and lost two days of knitting. When knitting against a deadline there is pressure. Generally I give myself these crazy deadlines but knitting with actual deadlines can be much harder. You can’t just ask that the rules be pushed out a wee bit because you had an upset tummy. Therefore, I fell behind and still haven’t caught up.

I won’t finish in time to medal at the Ravellincs. I’m okay with that – now – although I had fretted about it for a bit. The sweater will be finished and I’m knitting on it monogamously. Right now I’m about ten inches from the cast on edge. I need to reach seventeen inches before the armholes. There are a number of interesting components to the Scatness Tunic and without the pressure of a deadline I’m going to take the time to enjoy them. 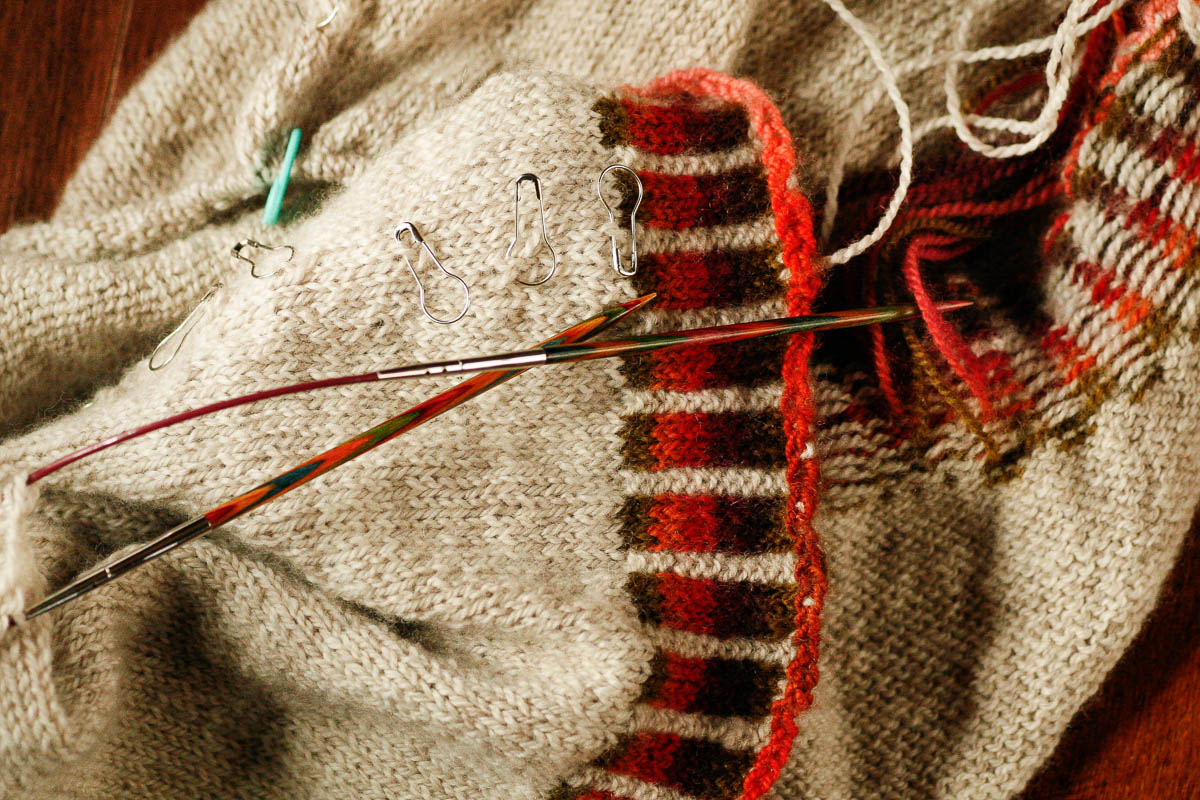