Dreaming of Scotland and the Bressay Dress

On the way to the Knit 1 Oxford Fiber Fest I knit the last rounds of stockinette and the lower ribbing of the Bressay Dress. Once we arrived at our hotel I soaked the lower six inches and hung the dress to dry knowing that a full soak and block would take much longer. My plan was to wear the dress on Saturday while I was teaching. Wearing comfortable clothing is a must when you’re standing and walking the entire day. And I try to dress well at a fiber festival because everyone there likes to represent.

I did change a few things from Gudrun Johnston‘s original pattern (from Fair Isle Style by Mary Jane Mucklestone). Cap sleeves are not particularly flattering on me so I extended the sleeves by about six inches bringing them to just above the elbow. Part of me wanted to take them just below the elbow and I may still pull the ribbing out and add a few inches. Probably not, though, because in my mind the dress is finished and once I’m done it’s hard to go back.

The other mod was to add about three inches to the lower portion of the dress below the colorwork. I had completed the ribbing and bound off but found the ribbing, which immediately follows the last round of colorwork, flipped up instead of lying flat.

Here’s a photo to show the problem. 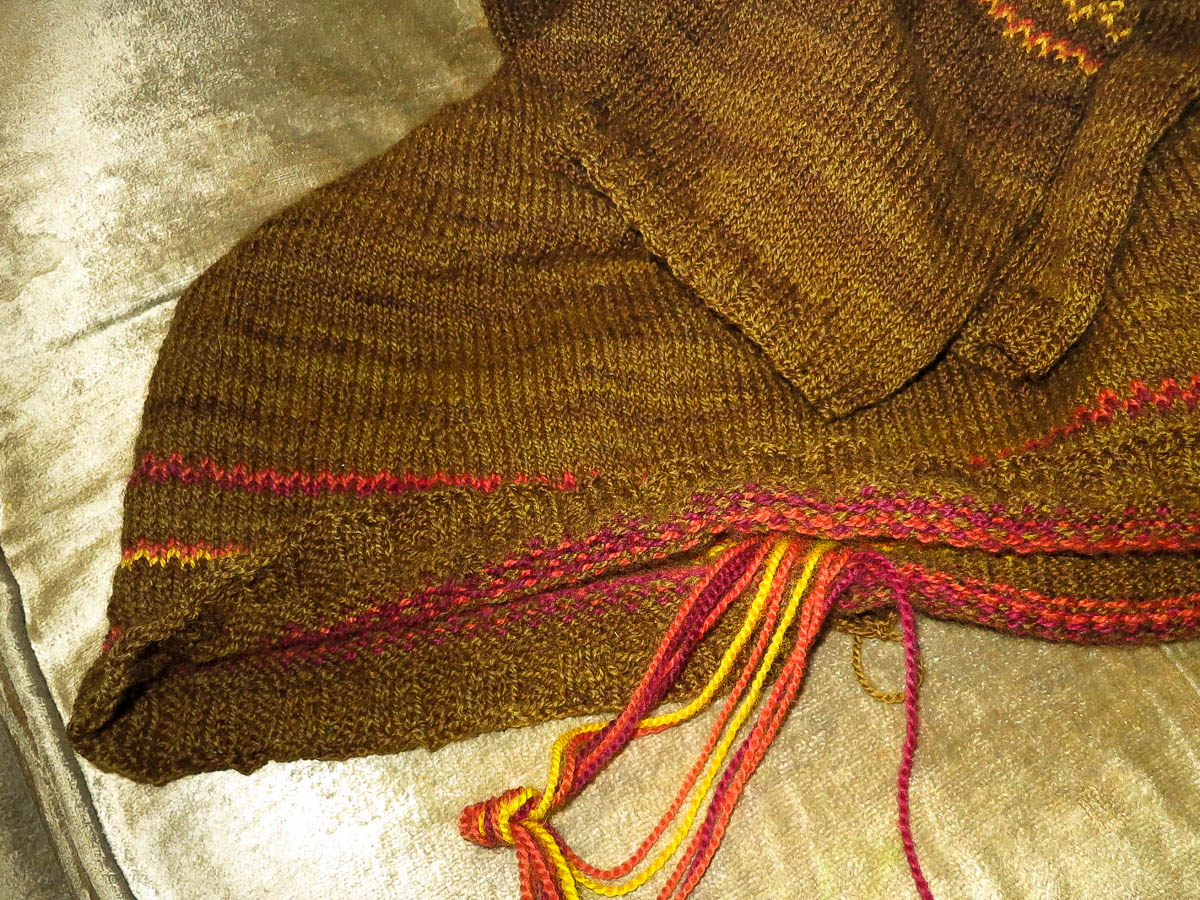 With this amount of flippage (I may have just made that word up but it seems to sum the situation up) I was concerned that it just wouldn’t block out nicely. The length of the dress was a wee bit short as well when I tried it on so there was no hesitation about ripping the ribbing out. Because I’d added inches to the sleeves and they didn’t flip and therefore I had a pretty good idea that the ribbing butting up against the colorwork was the cause of the flippage. So I ripped and slipped the live stitches back on the circular needle. Three more inches of stockinette were added before I started the 2×2 ribbing.

Because I knew I would wear the dress belted I passed on the pockets.

This morning Chris took a few photos while I stood on our balcony in 17F temps as a light snow fell. Note that I refused to give up the mug of coffee! Wearing a soft merino dress, tights and boots I felt pretty good. 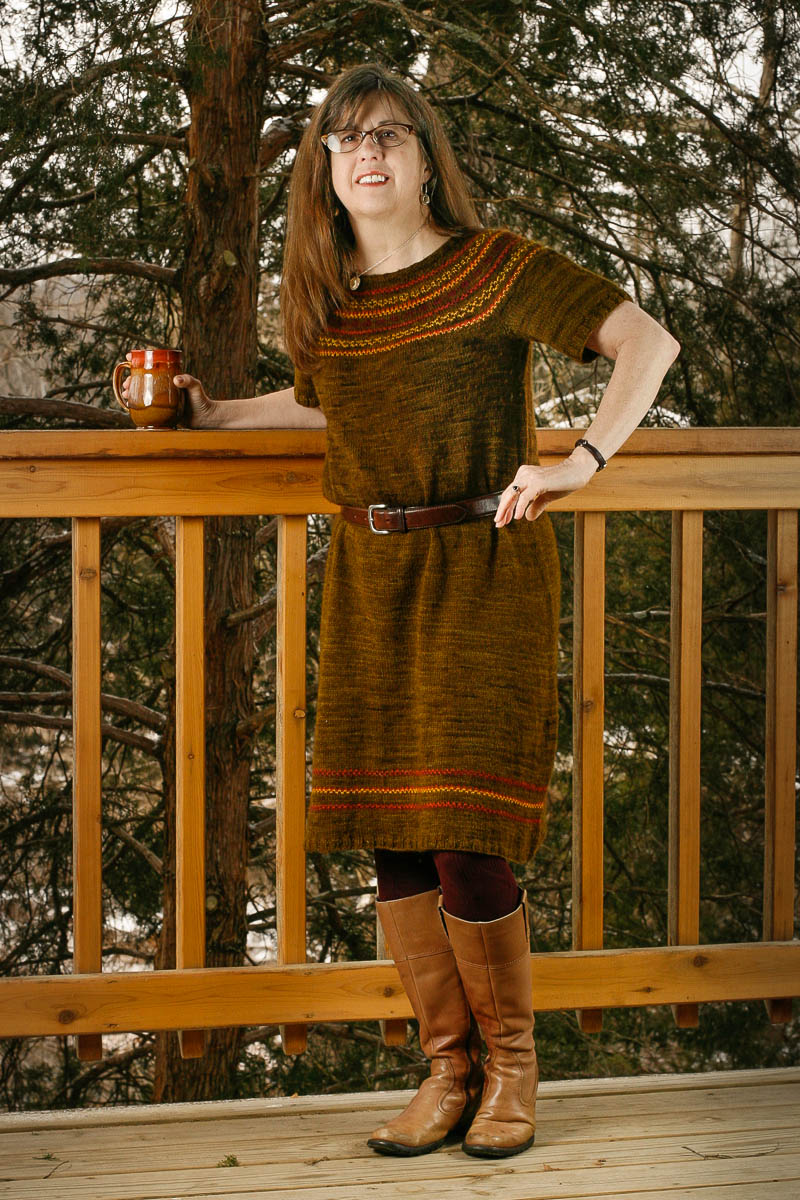 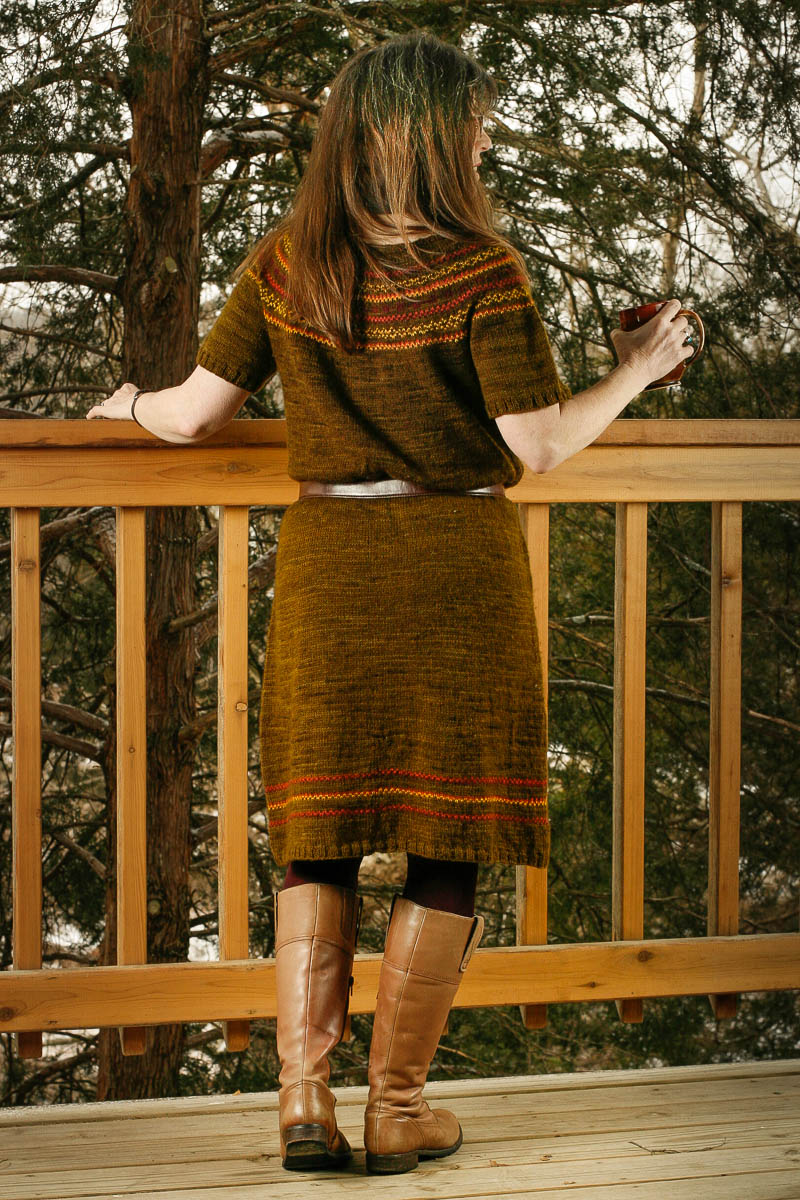 When I cast on the Bressay Dress back in October 2013 I named my Ravelry project Dreaming of Scotland. Visiting the Highlands, Edinburgh, and Shetland has been a dream of mine for ages. Decades really.

It’s been a long time since we’ve been to Europe but in May of 2014 we’re going to Scotland! For two weeks we’ll tramp around – see the sights from Hollyrood to lighthouses. I am so excited! 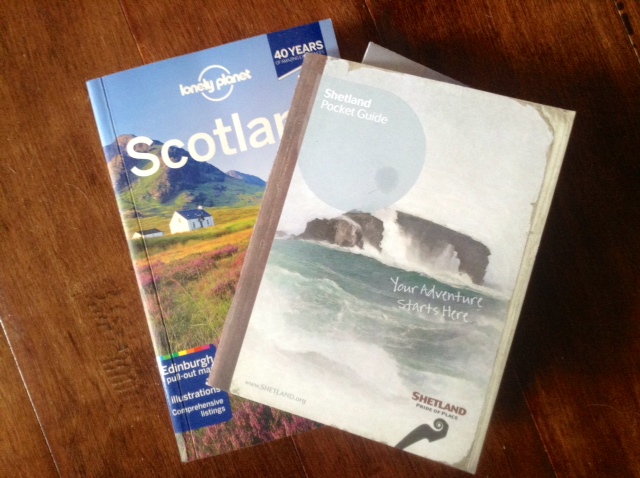 If you’ve been to Scotland and would like to suggest some stops that you consider to be “must see” places, feel free to leave a comment. Or even if you haven’t been and have read about something you’d like to suggest – please do.