Chris has been brush hogging our pastures, and at that slow, prodding pace gets to notice things that otherwise get overlooked. Yesterday when he returned from across the creek he brought two little green and yellow gourds. “There are probably a hundred of them near the creek,” he said. Thank goodness I know an expert in all things gourd!

A quick photo and email to Jan, a self-proclaimed Gourdphile over at Hungry Holler Art Refuge, and we had our answer – Buffalo Gourds!

I think Jan was maybe jealous. She called us “lucky ducks” and told me she wildcrafts for them in Arizona but hasn’t been able to get them to grow at the Holler. 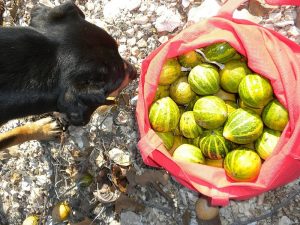 Of course, I had to go back to where Chris found these beauties and pick up a bag full. Tess joined me and nosed around. Down by the creek in the gravel the exposed gourds had turned light brown but under the desiccated vines it was like Easter egg hunting. There were bright yellow and green ovals about the size of extra large eggs. The trick was to avoid getting cockle burrs in my gloves. Not an easy task (which means I really should go easy on the dogs for getting them). 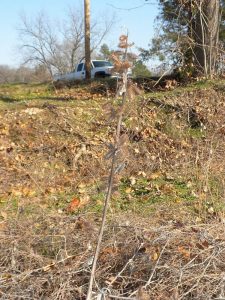 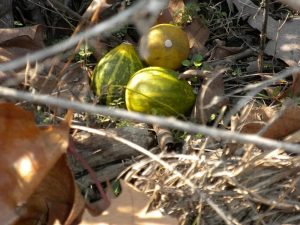 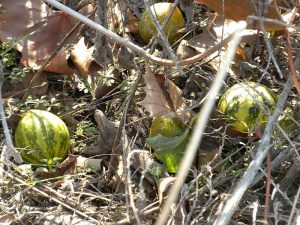 I came back to the house and polished the gourds with a dry towel. I had no idea what I would do with them, but I liked how they looked. Jan recommends stringing them by piercing them with a sharp wire. Once dried, she said, they’re quite fragile and seeds scatter like crazy, which is a treat for the birds.

Several years ago a friend noticed a large bowl of pine cones in the center of the dining table at the old farmhouse. she laughed and said that her daughter-in-law had bought some on ebay, but of course she knew I’d just picked them up under the tree for a quick center piece. With this memory in mind I loaded up the same walnut bowl. 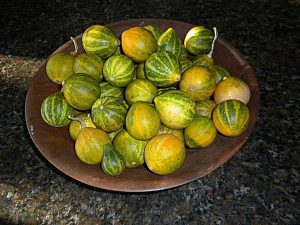 Of course, I didn’t stop there. I googled Buffalo Gourds. Cucurbita foetidissima has edible seeds and a long history of use by Native Americans especially in the Southwest. They contain saponins which is an important part of soap making. The root (which can be quite large) is/was used for ritual and healing purposes as well. Here’s a link to more information about the Buffalo Gourd – and a staggering photo of the root – which made my eyes bulge a little. Imagine – these pretty little gourds came from that freakishly big root.

I’m going to enjoy the Buffalo Gourds in the bowl and try to ignore that I saw the root photo – it looks entirely too much like someone half buried.