A weekend in the city – knitting, cycling, and fine dining.

,var gaJsHost = ((“https:” == document.location.protocol) ? “https://ssl.” : “http://www.”);document.write(unescape(“%3Cscript src='” + gaJsHost + “google-analytics.com/ga.js’ type=’text/javascript’%3E%3C/script%3E”)); var pageTracker = _gat._getTracker(“UA-xxxxxx-x”);pageTracker._trackPageview();
When you live, as we do, sixty miles from a real city (In this case Tulsa, although I’m certain many people would not consider Tulsa a real city although I beg to disagree) weekends off the farm can be jam-packed full of activities. One perk of living so far from town is the amount of car knitting a passenger can enjoy. I consider myself pretty lucky when Chris drives.

Before we left the farm we’d made our lists of stops and things to do. After a few errands we had dinner Friday night with my folks and Hillarey at one of our regular spots, Bros. Houligan. A fine place for steak, shrimp, chicken and some of the best green beans around. Conversation continued out into the street as we all stood around beside our cars.

Since it was still daylight when we all finally got in our cars Chris and I headed for the Blue Dome District to catch the Friday night criterium of the Tulsa Tough. This is maybe the sixth year for the bicycle races that have become one of the highlights of the year for cycling enthusiasts in our area. Even though Chris nor I would ever consider bicycling in such events ourselves (we lean towards the more leisurely ride or distance touring) we thoroughly enjoy it as a spectator sport. 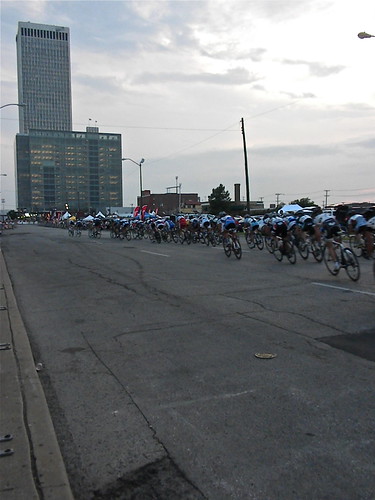 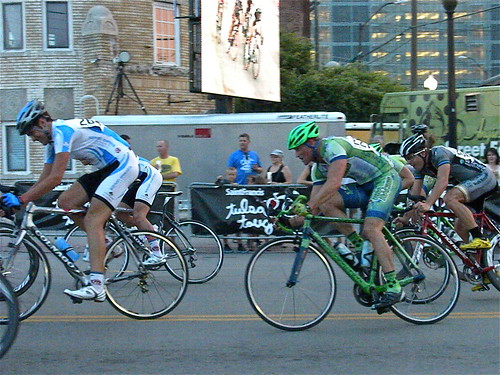 We arrived in time to see some of the elite men and women compete. It’s hard to take a photo of the cyclists as they whiz past you, but then it’s also hard to focus on them with the naked eye as well. They are flying around corners usually in large groups and it’s about all I can do to hold my breath as they pass. 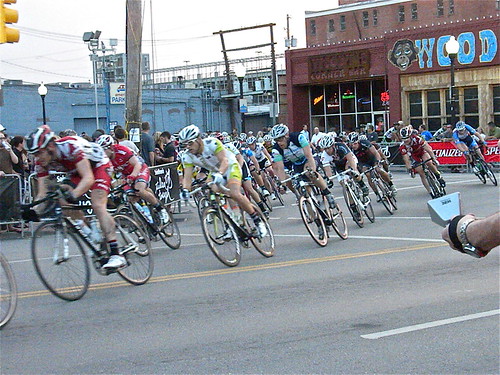 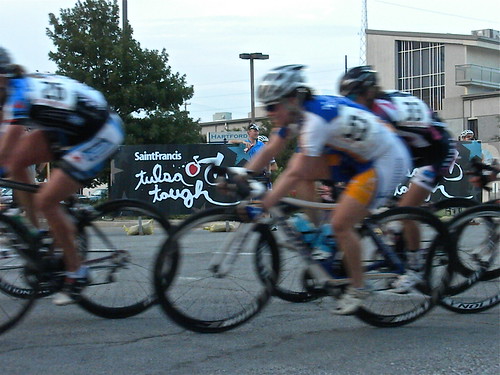 Even the cyclists competing next find a spot to watch the races and cheer on their team mates. 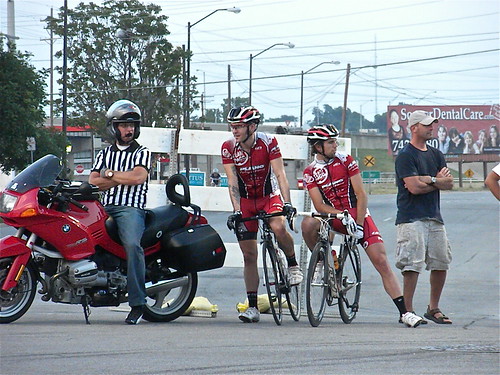 As the top level men were racing thunder and lightening began. With only a few laps remaining I convinced Chris it was time to head to the car before the storm began in earnest. The last laps included some harrowing crashes we learned later. The tires are skinny and hydroplaning happens quickly on a bicycle. We adjourned for the evening, anticipating an early wake up for market. 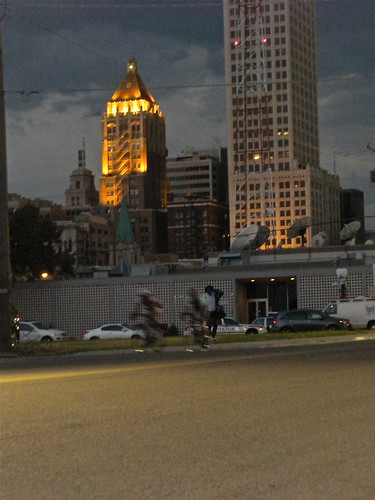 Shortly after 5am we were setting up our tent at the farmers market on Cherry Street. The weather was beautiful and people came out to enjoy the sunshine. After market we’d made plans to go to the Maxwell Library for an hour or two for Knitting in Public and Yarn Bombing. It was good fun (despite the fact that I completely forgot to take any photos!). Even with a small crowd there were enough knitted items created to yarnbomb the library! Several young library patrons (under the age of ten) were kept busy adorning benches, scanners and anything else the head librarian thought needed brightening up.

Saturday evening we attended the Lavender Farm Table Dinner at Living Kitchen Farm and Dairy. Our friends Lisa and Linda are amazing farmers. Lisa is a former chef and restauranteur from Seattle who became so interested in fresh local foods that her entire life changed. Each year we supply her with a bit of our Munstead lavender harvest and in her hands the sweet little buds and leaves are transformed into one of the finest meals you can hope to enjoy. With primarily local foods, which is either procured at our Cherry Street Farmers Market or grown at Living Kitchen, as many as thirty two people gather to enjoy seven courses on the screened in porch of a log cabin located on a 400 acre farm on old Route 66.

You’ll have to forgive me, I took only a few photos of the Lavender Farm Table Dinner. I was too busy enjoying the evening! But please, visit Lisa’s blog and the Living Kitchen website for further details about Living Kitchen. 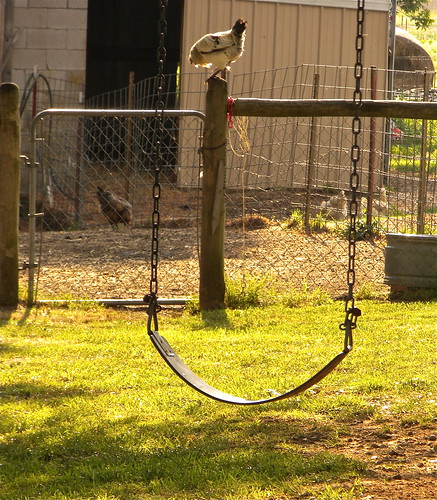 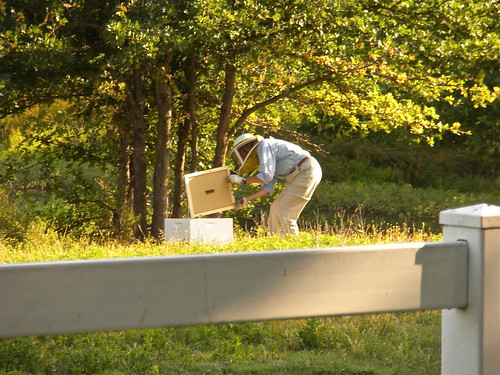 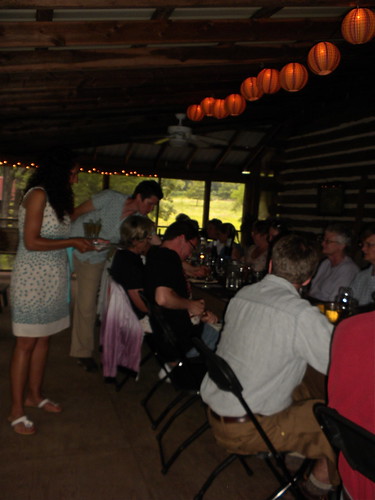 During the wee hours of Sunday heavy rain fell on downtown Tulsa. One of the first things we did after waking was check to see if the Tulsa Tough races were continuing. The rain had passed and no more was expected – the races were on!

We walked down 15th Street to Riverside Drive and spent the day walking the course and watching the races from various locations. We could smell burning brake pads as the riders took corners. We tried to spot strategic moves made on long straightaways. We breathed heavily in sympathy just watching riders climb Cry Baby Hill, where the partying crowds cheered them on, ran alongside offering encouragement, or simply sprayed the riders down with a fine mist from hoses. 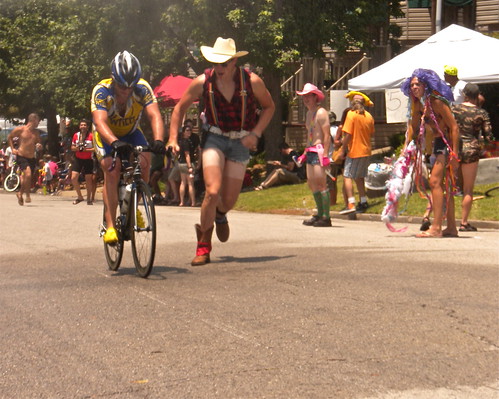 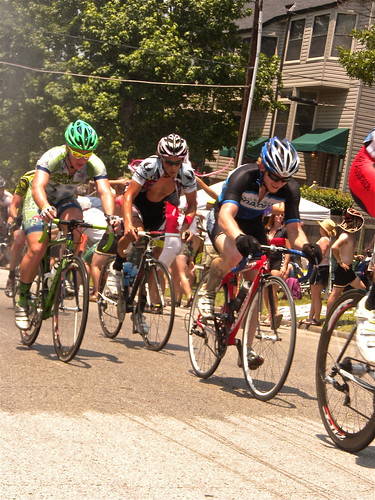 On the ride back to the farm in the van after the long weekend I couldn’t help thinking about Tulsa, my hometown, and how to some it may seem a bit too small to be called a city. But yet it does behave in a good many ways like a thriving city. It has a busy farmers market with over sixty local food vendors, it can host a KIP and a yarnbombing to share the love of fiber with the community, and it can pull a big crowd for a sport as unusual (compared to football say…) as bicycle racing.

Of Notebooks and Needles
December 2, 2020